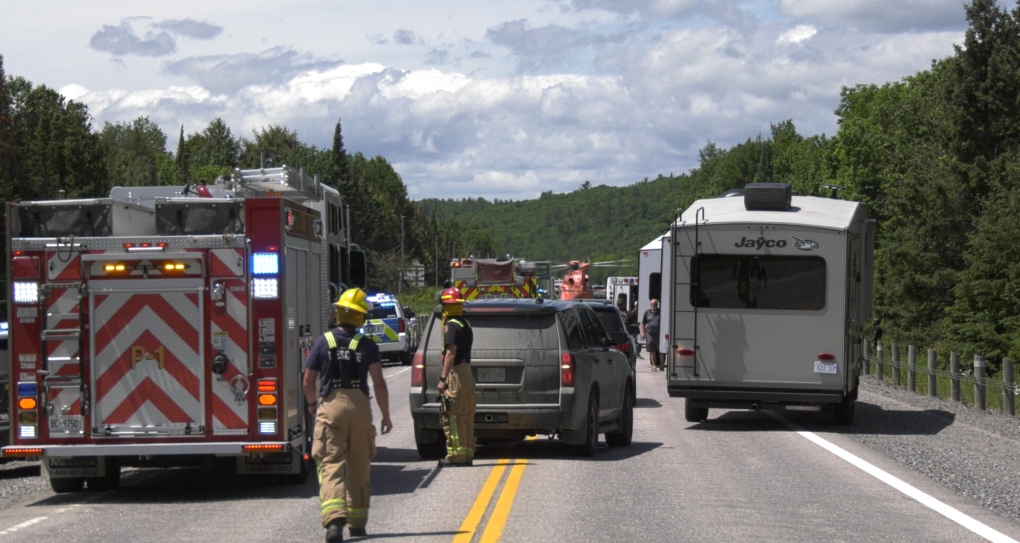 Emergency crews on scene of a two-vehicle collision in West Nipissing where a victim has been airlifted to hospital after suffering life-threatening injuries. June 20/21 (Eric Taschner/CTV News Northern Ontario)

One person is dead after a two-vehicle crash on Highway 17 in Nipissing First Nation Sunday afternoon.

Emergency crews were called to the scene of a head-on crash involving two vehicles on Highway 17 in Nipissing First Nation at 12:48 p.m. on June 20.

The crash happened west of Trap and Skeet Road between two vehicles travelling in the opposite directions. Fire crews had to help extricate occupants from the vehicles.

Ontario Provincial Police confirmed that the passenger of the westbound vehicle was pronounced dead at hospital.

The highway reopened to traffic around 6:30 p.m.

No word on the cause of the crash or if any charges are pending.

Emergency crews are currently at the scene of a two-vehicle collision on Highway 17 in Nipissing First Nation where one victim has been airlifted to hospital and another has sustained serious injuries.

Few details have been released but police have confirmed that fire crews did assist in the extrication of occupants from the vehicle.

Police closed the highway at the McInnes Crescent exit and setup a detour though Highway 64. The highway is expected to remain closed for several hours as police conduct an investigation.