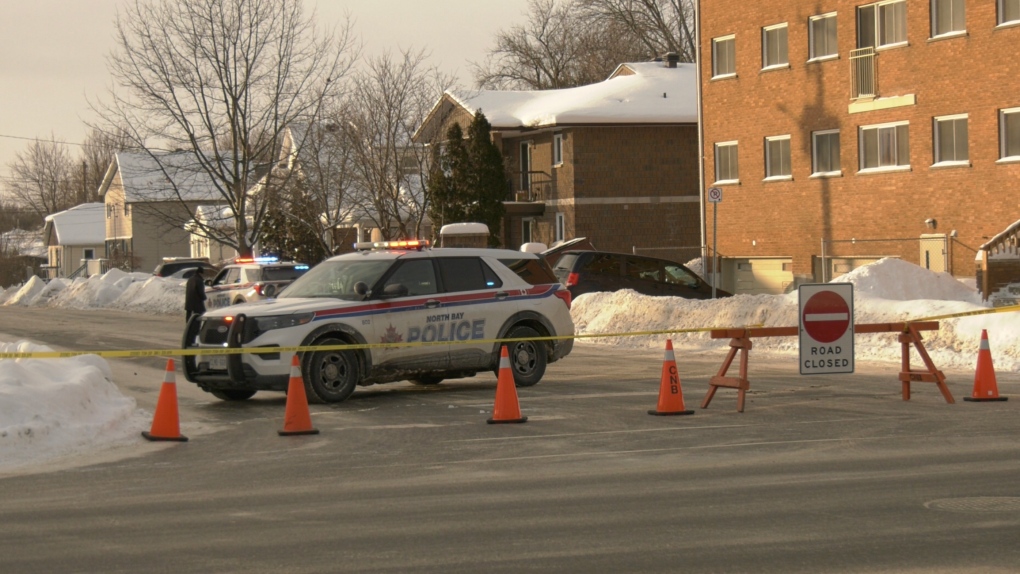 One resident in the area, Josh Farley, lives in an apartment complex at the corner of Chippewa and Cassells. He said he was awoken at around 4:40 am. Jan.30/22 (Eric Taschner/CTV News Northern Ontario)

The Special Investigations Unit is confirming that a North Bay police officer shot at a 34-year-old man early Sunday morning.

A media release issued by the SIU has released more details into the incident in the Chippewa St. area.

Officials say that the preliminary investigation suggests that officers encountered a man with a knife in front of a residence on Fraser St. just before 5 a.m.

After an interaction, the officer shot and struck the man.

Officials say that officers chased the man, who attempted to leave the scene, and he was arrested on Chippewa St. W.

The man is in hospital being treated for serious injuries. Additionally, officials say that the police officer was also treated for an injury in hospital.

The investigation is on going.

North Bay police have confirmed the Chippewa St. area has been closed as a result of an officer-involved shooting.

In a press release issued by the North Bay Police Service just before 11:30 on Sunday, officials confirmed that one person has been taken to hospital with non-life-threatening injuries.

As is the process with any officer-involved shooting, the Special Investigations Unit (SIU) has invoked their mandate and is investigating the incident.

Chippewa St. and Fraser St. will remain closed as a result of the investigation.

Members of the public are being asked to avoid the area at this time.

The SIU is an independent agency that investigates incidents involving police that have resulted in death, serious injury, alleged sexual assault, or a firearm being discharged at a person.

North Bay police have closed off a section of Chippewa St. between Cassells St. and Fraser St. for an on-going investigation.

“We ask that the public avoid the area for the remainder of the day. There is no threat to public safety,” police wrote on Facebook.

One resident, Josh Farley, lives in an apartment complex at the corner of Chippewa and Cassells. He said he was awoken at around 4:40 am.

“I looked out the window and sure enough all of the cruisers were there,” recalled Farley.

Farley has lived in the area for three years and says there is constant police activity.

“This area is always busy,” he said. “I’ve never really seen it closed down this long.”