Northern Ontario on board with Viking's plans to cruise Great Lakes 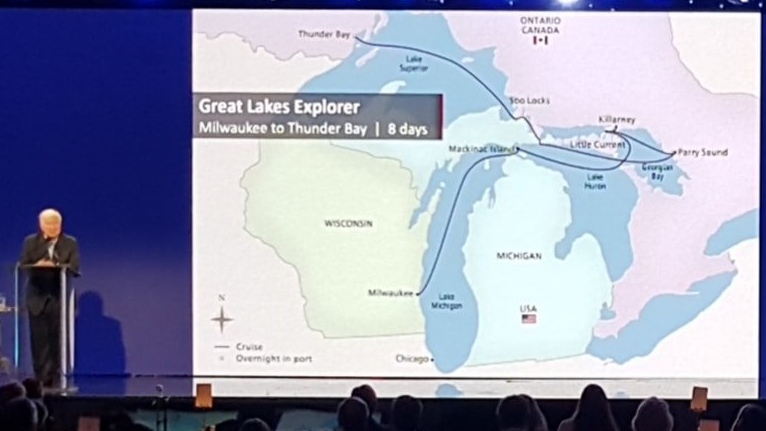 Viking has announced it will venture into the Great Lakes. (Photo: Destination Northern Ontario)

SUDBURY -- Viking Cruise lines, a company known for its luxurious European river cruises, now plans to bring some of that opulence to the Great Lakes by expanding to Northern Ontario.

The Swiss cruise company announced this week that Viking Octantis and Viking Polaris will be sailing Lake Superior starting in 2022.

It’s an announcement that’s been in the works for some time now as the Great Lakes Cruising Coalition worked in conjunction with destinations such as Thunder Bay, Sault. Ste. Marie, Killarney and Manitoulin Island.

Pepe says it’s given stakeholders a reason to celebrate in Thunder Bay. The city had cruise ships calling on the northwestern Ontario port from 1996 to 2012. Viking is planning on making the city a ‘turnaround port,’ which would mean tourists staying in hotels for overnight stays, dining in restaurants, taking in attractions and ships replenishing their supplies.

City officials have crunched the numbers and they’re anticipating the announcement will mean 5,200 tourists a year and an estimated $1.6 to $2.3 million for the economy.

"We’re fairly fortunate here that we have a full dock, 900 feet long and 27 feet deep, built for big freighters. It’s a brownfield, an old industrial site that when we activate it for cruise ship season, we can transform it to a park-like setting," said Pepe. "Indigenous drummers, dancers, Scottish pipers to create a welcoming facility for guests. We can park buses and service trucks adjacent to ships and it’s walkable to downtown making an incredible hub."

"I was lying awake all night, itching to get the word out, it’s exciting. I’ve always believed it’s exotic as anywhere else, seeing companies like Viking … it’s been a long strategy that’s really starting to pay off," he added.

Tourism Thunder Bay had previously announced another cruise ship, the Hanseatic Inspiration, will be visitng the city in June 2020 as part of a 14-day excursion.

"The ability for communities in Northern Ontario to take advantage of these stops is really big news for Thunder Bay but really all those along the lakes and itineraries. It’s huge news for the communities on the ground and for us as the destination," she said.

Hopkin says they are still trying to determine how it’ll work with what stops they decide to make and how long they will be at each port.

"The cruise market is great and I think people are starting to notice the gem we have on the Great Lakes and it’s only helping us a tourism destination. There’s a real opportunity for growth," she added.

Killarney Mayor Ginny Rook says she was ecstatic to learn about the news given how much it might mean in terms of economic benefit.

Rook says the town is already enjoying the spin-off that’s been created as a result of the recently built Killarney Mountain Lodge. There’s more employment, houses are being built and the town is enjoying the increase in property taxes to help fund additional projects.

"I think it’s wonderful, it’s going to help a lot of the business in town, they’re going to be accessing a lot of those businesses," she said.

The mayor adds plans are now in the works with the lodge to build a new wharf in the community.

Viking is currently in the process of building these two ships which will be tailored to expedition-style cruising.