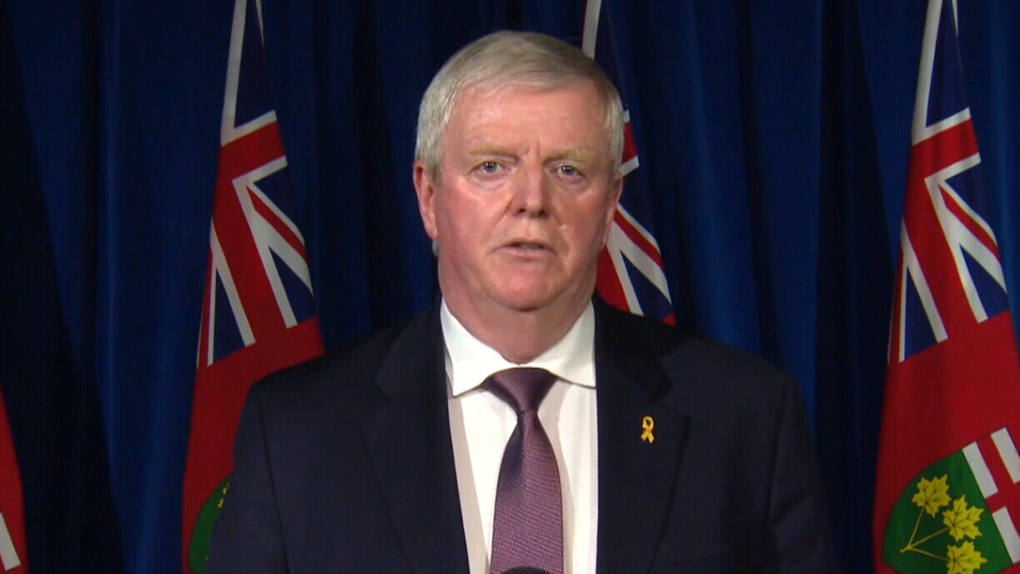 Rick Hillier, the chair of Ontario's COVID-19 vaccine task force said Tuesday that it will likely be the spring before there's a province-wide distribution of coronavirus vaccines that includes northern Ontario. (File)

SUDBURY -- The chair of Ontario's COVID-19 vaccine task force said Tuesday that it will likely be the spring before there's a province-wide distribution of coronavirus vaccines that includes northern Ontario.

Rick Hillier told reporters that would be phase 2 of the vaccination plan, with phase 1 focused on the province's COVID hotspots and areas particularly vulnerable to outbreaks. Initially, priority will be given to long-term care homes and frontline health-care workers.

Isolated and First Nations communities in the North, however, will be included in phase 1 vaccinations.

"I would speak to the First Nations here and just say be assured that those people in the long-term care homes or retirement homes that are First Nations are going to be looked after as part of this priority," Hillier said. "At the same time, we started in parallel a project with a small task force to go into northern Ontario and to look after initially the isolated communities, primarily along the James Bay to start with who are at risk themselves and to vaccinate the people there."

Consultations with chiefs and community leaders have already begun, and Hillier expects that process to begin in early January.

"We want to do that in the phase 1 in the north," he said. "I think it's 31 communities that you can fly into only. And then we'll look at how we roll across the northern part of Ontario with a continuation of that program and ensure that we get to as many people as possible in those communities that have survived largely because they've isolated themselves from the outside world."

Hillier said the province has received 95,000 doses of vaccines and have administered 14,000.

"We expect tomorrow to receive about 50,000 Moderna vaccines and we will use those in the long-term care homes," he said.

He expects they will receive 300,000 doses in January, with increasing deliveries each week after that.

"In February, that will grow that to about 700,000 vaccines and … in March will go to about 1.1 million vaccines, and so by the end of phase 1, we hope to have vaccinated over a million health workers and people in the most vulnerable circumstances here in Ontario. We can't do it any faster. We don't have the vaccines coming to us any faster. And if we did we would use them more quickly."

Phase 2 will likely begin in April, he said, as the province builds its capacity to administer the vaccines.

"We're looking at 15 million vaccines flowing into Ontario during the months of April, May and June, and while we do not know exactly when they'll come, we're assuming that will get them at five million doses of vaccine per month for April, May and June and therefore as a result of that, we want to be ready to put needles into the arms of about a 150,000 people across Ontario per day."

"I actually think, with the number of vaccines that we have coming in, we will very quickly be able to get at a number of priorities and we'll be able to get into looking after many of the essential workers across Ontario, whether that's farmworkers our police officers our school teachers or our other folks we will be able to start … to vaccinate them early in that Phase 2."

Once widespread vaccination is available, the oldest Ontarians will be eligible to receive the vaccine first, then people ages 50-75 and so on.

"We want to roll through April, May and June and use every single one of those 15 million vaccines," Hillier said. "And if you do the calculation, you will realize that's about 7 ½ million people … If you add that to the over 1 million people that we will be able to vaccinate in Phase 1, we're going to be at 8.5 million people in Ontario vaccinated by the end of June or early July. That's the bulk of Ontarians who we believe are both eligible to take the vaccine and who will want to take the vaccine."

Phase 3 of the vaccination plan will take place in late summer, providing booster shots and vaccines to anyone else who wants them, he added.

Hillier mentioned criticism he has received for taking a break from vaccinations over Christmas. That won't happen again.

"You know, we heard we heard loudly from people this past 36 to 48 hours, they want it rolling all the time," he said. "We will be working straight through. We will not take any more days off until we win this war against COVID-19."