By combining two camp staples, a sauna and pontoon boat, a northern Ontario dealership has created a houseboat dubbed the Sauntoon.

Loonie Toons Pontoons and Powersports is located in Desbarats, Ont., on Highway 17 just over 50 kilometres east of Sault Ste. Marie.

Owner Daniel Cedolia said he built the first Sauntoon boat five years ago and custom built the second one earlier this year.

A customer from Pine Island, Phil Murray, approached Cedolia with the idea of building a sauna on top of a pontoon boat in 2015. Cedolia used Murray's shop and hired some contractors for the build. It took the crew two months and two float tests to get the right capacity to hold 14 people, a wood stove, chimney pipe and pile of western cedar, he said. 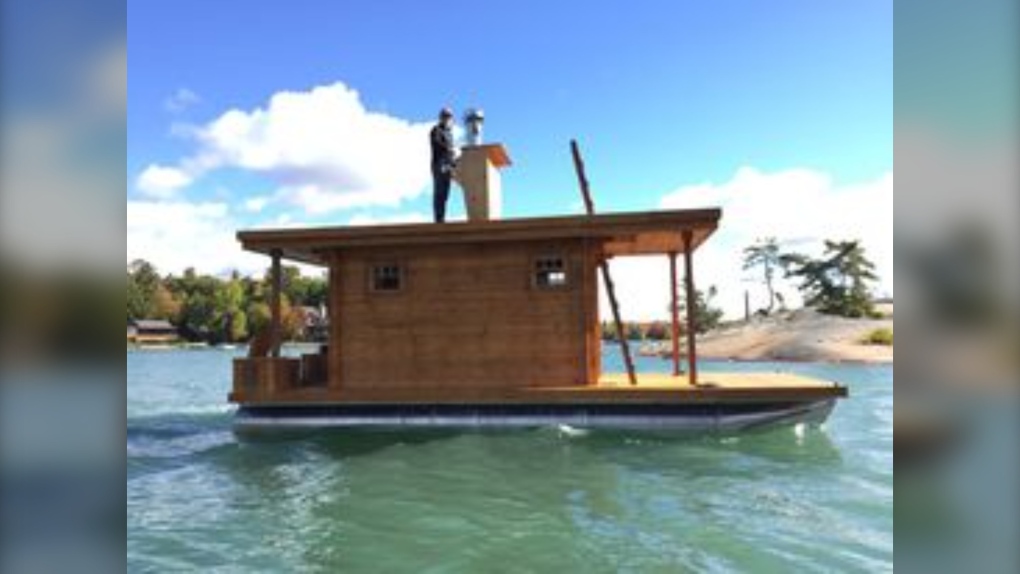 Using a Tritoon pontoon for the base, made by JC Manufacturing, the upper portion of the boat is built by Loonie Toons from white cedar and even features a wood burning sauna stove. 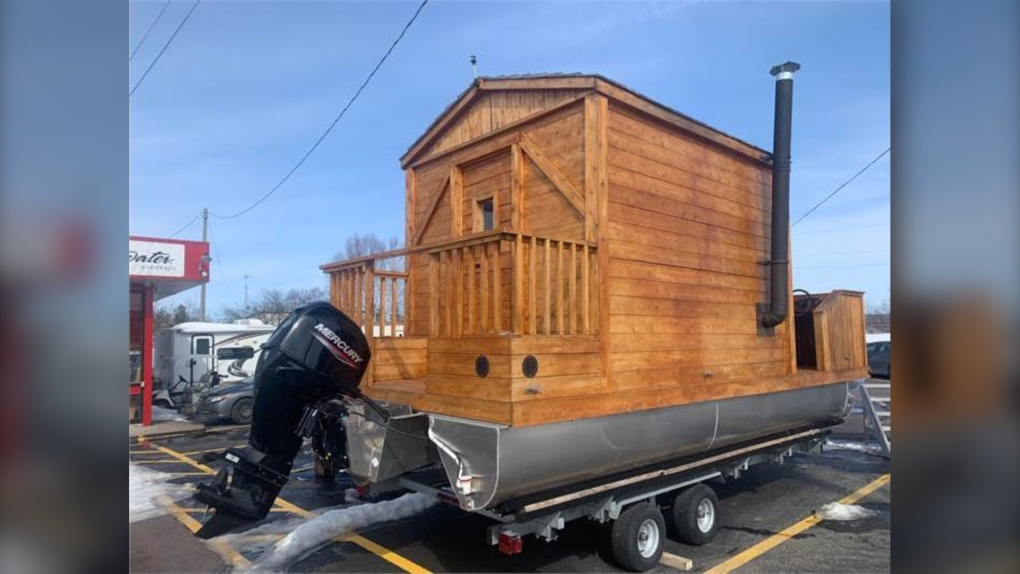 A Sauntoon boat is a sauna built on a pontoon frame. (Loonie Toons Pontoon and Powersports)

A creation of this magnitude does not come cheap due to all the work involved in building it. There is currently one listed on the company's website with a new Mercury 40 HP, 4-Stroke outboard motor and trailer with a price tag of $56,500.

Cedolia saw an opportunity to sell pontoon boats about seven years ago after sourcing one for a friend only to discover it was too small for their needs. After only an hour of listing the boat online, he said he had eight people from across the province fighting for it.

"I then knew what my next venture would be," he told CTV News. Prior to that, he had been a documentary filmmaker for 27 years. "We started doing this in 2014 and everything was unplanned, it was just a natural flow."

Cedolia said his team has done other custom builds on pontoon boat frames, including building a houseboat to allow customers to camp on top of the water, similar to a camping trailer.

"I'm a passion driven guy and take pride in my work and I work in craftsmanship," he said. "The sky is the limit when it comes to custom boats. I can't think of a better way to enjoy the summer and share my passion with customers wanting to make memories for their families."

Canadian Forces veteran James Topp was joined by Conservative Party leadership candidate Pierre Poilievre on his march through Ottawa today, as part of the final leg of his cross-country march to protest COVID-19 vaccine requirements.

Omicron cousin BA.5 predicted to cause nearly 70 per cent of COVID-19 cases by Canada Day

Researchers examining the threat of emerging COVID-19 strains predict Omicron BA.5 will account for nearly 70 per cent of cases in much of the country by Canada Day.

The Supreme Court of Canada says the expanded rules to further prevent a sexual assault complainant's past from being used against them in a trial are 'constitutional in their entirety.'

Stocks are down, but here's why experts say you shouldn't panic

As stocks continue to slump, it can be easy to let your emotions take over if you've got money invested in the market. But experts agree that there's no need to panic if you're invested in the right type of portfolio with the right level of risk.

The traditional Canada Day fly-past over Ottawa by the Canadian Forces Snowbirds has been cancelled, following a problem with the aircraft's emergency ejection parachute that grounded the fleet.

More than a month after Canada reported a shortage of baby formula for allergic infants, Health Canada says supplies will continue to be limited during the summer even with new shipments on the horizon.

An emergency room physician in Toronto is warning that COVID-19 variants will continue to 'mutate endlessly' as the Omicron subvariants BA.4 and BA.5 are poised to become the dominant strains of the virus.

A group of Quebecers is going to court to argue that Mary Simon's appointment as governor general should be invalidated because she isn't fluent in French.

My landlord is increasing my rent – what should I do?

With increasing rent prices likely to be the reality for many Canadian tenants, some may be wondering how to navigate rising costs, or whether any course of action can be taken, if any. Legal experts across the country share their advice on how to handle a rent hike.