SUDBURY -- Al Corbould had just returned to his cottage north of Kirkland Lake, for the first time in a year with his 11-year-old golden retriever, Hunter.

"He was back in the bush maybe 100 yards, maybe 200, and he just got into a real fit of frenzy back there -- just a terrible sound that he was making, barking…not barking, but whining and there was no question there was a problem,"  Corhould said.

He began franticly searching for Hunter when he ran into a calf moose that he estimates to be about a month old. Corbould decided to return to his cottage and that is where he found his dog bleeding from the mouth.

He figures the dog was kicked in the face by a cow moose that was protecting its young. "A moose protecting a calf, they’d flat out kill you. So, yeah, he’s probably lucky that there were not other injuries involved," said Dr. PJ Rocheleau, from the Espanola Animal Hospital.

After a visit to the vet in Timmins, it was determined that the impact was enough to break Hunter’s jaw and would need surgery.

Dr. Rocheleau is the only veterinarian in northern Ontario that can perform this surgery, so the owners had to make some unique travel arrangements in order to fix the problem Friday.

"I called up my friends at Expedition Helicopters in Cochrane and -- I used to be their CFO and worked with them for years -- and they very graciously said 'we can do it, we can get him down there by 5 o'clock,'" said Peggy Lainklater, Corbould’s wife.

"We have dogs flown in here all the time but I don’t remember one ever landing in a helicopter across the street before," Rocheleau said.

If Hunter hadn’t arrived so quickly he would have had to wait until Tuesday to correct the problem. The couple said since they don't have pet insurance, they will pay all of the costs out-of-pocket.

"You know, he’s part of our family, what could we do? You know all of the kids are grown up and living on their own now -- the children, the great-grandchildren, and so on -- but Hunter’s part of us, you can’t just throw them away," said Lainklater.

"I’m sure within a few days he’ll pretty well be back to normal. The jaw actually heals pretty quick. It will take about six weeks, maybe eight in his case because he’s a little older dog, and then you’ll have solid bone there and it will be like it never happened," he said.

The couple lives in Cochrane and will need to travel to Timmins three times a week over the next two months or so so that Hunter can receive laser therapy to aid in his recovery. He is also on special medications and requires ice packs to be applied several times a day. 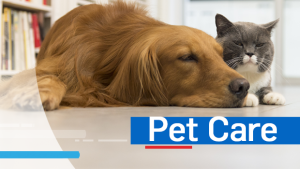