Northern OHL teams look ahead to the future 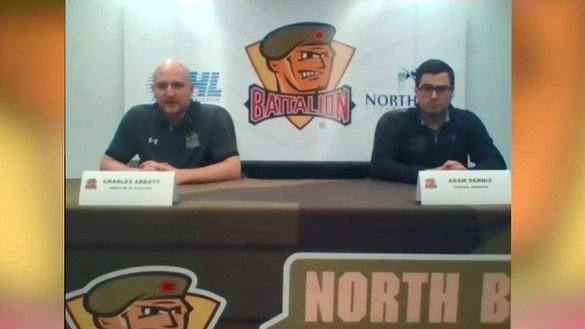 The North Bay Battalion started a day early on April 3, by announcing defenceman Ty Nelson as its first overall pick in the draft. April 3/2020 (File photo)

SUDBURY -- Despite the fact that that regular season and post-season play were cancelled, the Ontario Hockey League conducted its annual Priority Selection Draft on April 4, as three Northern teams started stocking their respective rosters for the future.

The North Bay Battalion started a day earlier April 3, by announcing defenceman Ty Nelson as its first overall pick in the draft.

At the end of the regular season, North Bay had finished last in the league standings and had the right to pick first.

Nelson comes in as junior hockey's top prospect, and is expected to bolster the Battalion's blueline in his rookie season.

The right-handed 16-year old shooting rearguard had 11 goals and 22 assists with the Toronto Canadiens of the GTHL.

He comes in over 6 feet, scoring 29 goals with 19 assists for 48 points as a 15-year old. The Hounds were expected to add scoring depth and didn`t miss with this pick.

Also in the first-round, the Sudbury Wolves are already drawing accolades with the 11th overall pick in the first round, nabbing Quebec`s David Goyette.

He impressed scouts with 49 goals and 153 points while playing in the U.S at the South Kent Selects Academy as a left-shooting 15-year old centre.

Now, General Manager Rob Papineau needs to convince the St. Jerome native that Sudbury is where he wants to further his hockey development.