SUDBURY -- The City of North Bay says the latest strike by Ontario education workers will temporarily close some of the roads in the downtown core on Friday.

Over 1,000 teachers, support staff, union members, parents and children from all four of the province’s teachers' unions are picketing in front of Nipissing MPP Vic Fedeli’s office Friday.

And most major intersections in Sudbury are filled with teachers and support workers, in the largest round of job action seen in decades. 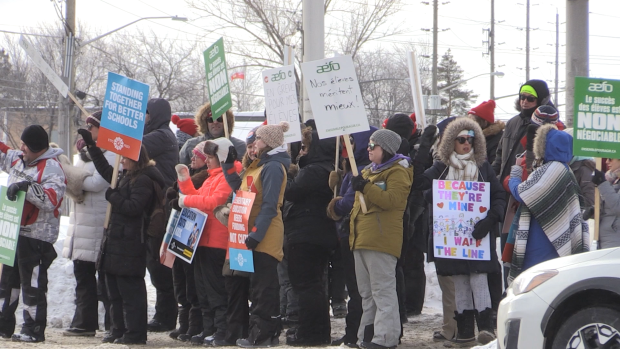 This comes as the job action escalates to an Ontario-wide strike among all of the unions representing the province's teachers and support staff. The unions say they are fighting the province on: class size increases, cuts to special-education funding, the province’s proposed mandatory e-learning courses, and teachers' compensation.

Roughly 200,000 members will be hitting the picket lines together for the first time since 1997. Around 30,000 union members are expected at Queen's Park. The strike action means more than two million Ontario students are in class.

"This government has not shown themselves to work in good faith and we need these negotiation offers and proposals brought to the bargaining table, so they can be negotiated as they should be done," said District 4 OSSTF Vice-President Parker Robinson.

Statement from Vic Fedeli, MPP for Nipissing and Ontario's Minister of Economic Development, Job Creation and Trade on the teachers' rally:

"Our focus is to keep kids in the classroom. Priority number one is getting a deal done, and that’s what we want to do. We listened to parents and students and we have been reasonable and made significant moves at the table:

We have demonstrated our reasonableness through the agreements we reached with CUPE and EWAO. We are going to continue to negotiate in good faith with teacher union leaders so that we can see an end to the disruption and keep our kids in class."

"We’re not going to give up on this fight. This is too valuable for us to cave in. It’s a pillar of our community. The education system is," said Robinson.

With files from Eric Taschner from CTV North Bay, Dana Roberts from CTV Sudbury, and Justin Zadorsky from CTV London.