As of Friday morning, there are 14 active forest fires in the northeastern Ontario region, according to the Ontario Ministry of Northern Development, Mines, Natural Resources and Forestry. 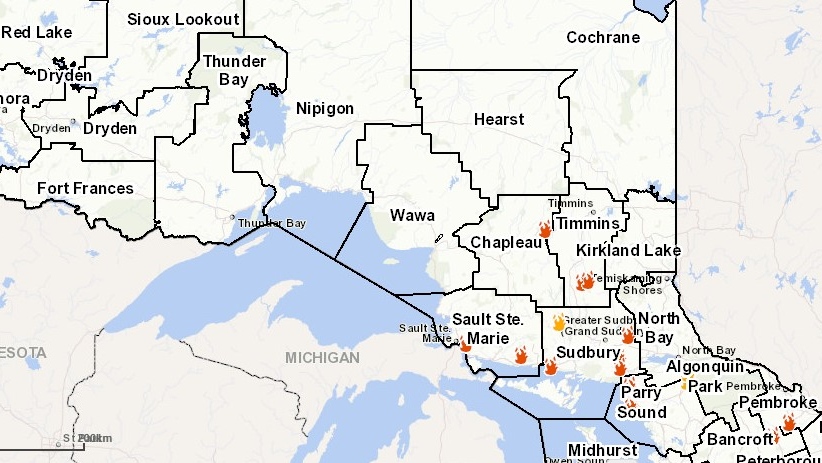 Forest fire info map as of May 13/22 (Ministry of Northern Development, Mines, Natural Resources and Forestry)

(Ministry of Northern Development, Mines, Natural Resources and Forestry Forest Fire Info Map as of noon on May 13, 2022)

STILL OUT OF CONTROL

The biggest one, at 357.5 hectares, is in the Timmins area. It was the first fire of the season in the Timmins area and began shortly after noon on Tuesday and is still not under control. Timmins 1, as it is called, is located "two kilometres southeast of Morin Village and half a kilometre north of Barager's Lake." Ten fire ranger crews are battling the blaze that closed Highway 560 for two days as a precautionary measure. It reopened Thursday morning.

There are two fires that are more than 200 hectares in size in the Sudbury District still not under control after starting Tuesday afternoon.

Sudbury 4 is located three kilometres east of Estaire and one kilometre south of Nepewassi Lake Road. Seven crews are working on getting it under control.

Another forest fire of note, Timmins 2, is near Duhabani Creek and is nearly 60 hectares in size.

There were four new fires in the last 24 hours, one of which has been extinguished.

The biggest fire is North Bay 3, located about eight kilometres southeast of Powassan. It started around 4:30 p.m. Thursday and has grown to 30 hectares overnight.

Half of the fires are under control or are being held.

A 60-hectare fire in the Chapleau District is being held. It is located 2.5 kilometres south of Highway 101 and six kilometres west of Foleyet, west of Timmins.

Two fires began on Monday in the Sault Ste. Marie District and are under control. One is 40 hectares in size and the other is 27.7.

Two other fires, one in the Bancroft District and the other in the Pembroke District, are under 10 hectares and are under control.