The cameras are capturing a winter wonderland in downtown Powassan, where Hideaway Pictures is shooting a Christmas film called 'The Christmas Farm.'

In addition to cast and crew, on set are Grade 12 Chippewa Secondary School students Isabelle and Emma Gauthier-LeBlanc.

The sisters are pursuing their dreams to become actors and, one day, work on film and television productions.

"To me, it's just so fascinating and brings me so much joy to watch these movies and see these actors perform," said Isabelle. "I want to bring that same joy to people."

Emma said she's met with the cast and crew and they've been giving her advice.

"Performance acting is really what I'm interested in," she said. "I've had a chance to talk to the stand-ins and they've been really helpful."

Co-op students in North Bay and surrounding areas interested in the film and television industry are getting a chance to work with crews on set thanks to a new partnership between the Near North District School Board and the Northern Ontario Film Studios.

The Near North District School Board is partnering with the Northern Ontario Film Studios (NOFS) to provide on-set training to students looking at pursuing a career in film and television. 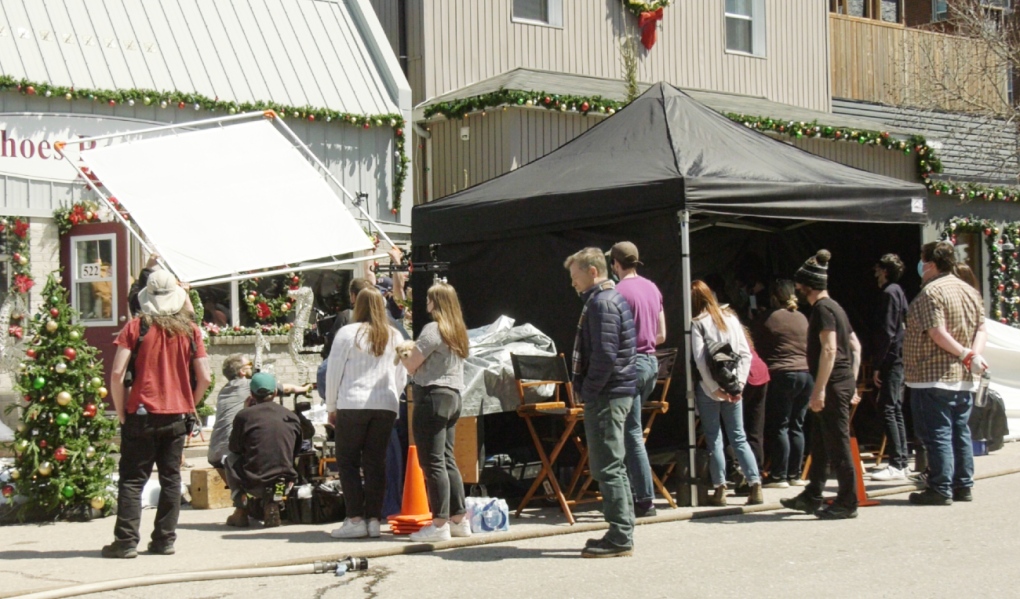 The cameras are capturing a winter wonderland in downtown Powassan, where Hideaway Pictures is shooting a Christmas film called 'The Christmas Farm.' (Eric Taschner/CTV News)

"I want to be able to offer these opportunities that I never had growing up and that's what this initiative is all about," said David Anselmo, business development officer with NOFS.

Students will get an introduction to the film set, learn etiquette, how to speak the film lingo, meet the crew and pick up some of the tricks of the trade.

"Once they come out of high school and they do want a career path in the northern Ontario film industry, then we can specialize and strategically pinpoint exactly what their passions are and what departments they like to be in and how we can grow them into those skills that they need," said Anselmo.

School board chair Jay Aspin met with Anselmo last fall and the two came up with the concept.

"I indicated that you've got the facilities, we've got the students," said Aspin.

"It sounded like an ideal synergetic match and he agreed."

Through the partnership, the school board will be able to offer several co-op opportunities at a time in various areas of the film sector. That includes performing, directing, editing and more.

In summer, adult co-op students will also have the chance to get on set.

Anselmo said the key is to develop local talent who want to stay in northern Ontario to create films and TV shows.

At the same time, he said it will help address a growing shortage of qualified production crew.

"This training initiative will hopefully bring fresh new faces into our industry and help them learn at a young age what it takes to be in the industry."

With its sister company Hideaway Pictures, the NOFS has produced more than 60 films and provided production services, studio space and equipment rental for more than 100 film and television projects in northern Ontario.

Having three studio spaces in the North Bay and Sudbury area, it has created more than three million hours of work for northern Ontario residents, amounting to more than 2,000 full-time jobs in the north.

In 2021, NOFS and Hideaway Pictures announced a new $125 million deal to bring more than 25 new film and television projects to northern Ontario in the next five years.

With young talent on the way, there's optimism for even more production down the line.

"I thought it was impossible (to get into the industry)," Emma said.

"I'm just from North Bay. If you want it bad enough. It will happen."

New federal regulations to force down the greenhouse gas emissions from gasoline and diesel will cost Canadians up to 13 cents more per litre at the pump by 2030.

Air Canada is planning to reduce its flights in July and August, according to a statement from the company's president, as the airline continues to deal with 'customer service shortfalls.'

Have you been affected by airport delays or flight cancellations? We want to hear from you

Have you been affected by airport delays or flight cancellations? Have you arrived at your destination without your luggage? Did you have to cancel a trip because your passport didn’t arrive in time? We want to hear from you. Email CTVNews.ca at dotcom@bellmedia.ca.

The Supreme Court of Canada will issue a constitutional ruling today about extensions to Canada's rape shield laws made by the Liberals four years ago.

The National Advisory Committee on Immunization is recommending booster shots this fall in advance of a possible future wave of COVID-19 in Canada.

Russian President Vladimir Putin shot back at Western leaders who mocked his athletic exploits, saying they would look 'disgusting' if they tried to emulate his bare-torso appearances.

A 20-year-old woman was fatally shot Wednesday night while she pushed her 3-month-old infant daughter in a stroller on New York's Upper East Side, police say.

NATO faced rebukes from Moscow and Beijing on Thursday after it declared Russia a 'direct threat' and said China posed 'serious challenges' to global stability.