When war in Europe broke out in 1939, Gerald Laronde walked the halls of Scollard Hall Boy’s College before enlisting with the Canadian Armed Forces to take on the Nazis.

“He was a wireless tail gunner,” said his nephew and namesake Gerald Laronde.

“He was driving Hamptons. He was killed on landing in Lincolnshire and he’s buried in Waddington, England.”

The elder Laronde is one of the ‘Scollard 31, a group of 31 young men from the former school who gave their lives in the war.

St. Joseph-Scollard Hall Catholic School held a Remembrance Day ceremony Thursday, paying respects to the Scollard 31 and the 352 people from the school who fought in the war.

Colin Vezina's brother, Howard Vezina, was a member of the Scollard 31.

"He was assigned to the Irish Fusiliers, who were a part of the Vancouver regiment,” Colin said.

“They were shipped down the Pacific to Panama through the Panama Canal to the British West Indies to guard against German invasion by submarine … Somewhere along the line on training, he suffered a head injury and it killed him."

After the war ended in 1945, the mothers of the Scollard 31 commissioned a statue of the Virgin Mary, but it was lost when construction began to merge Scollard Hall with the then St. Joseph's College. 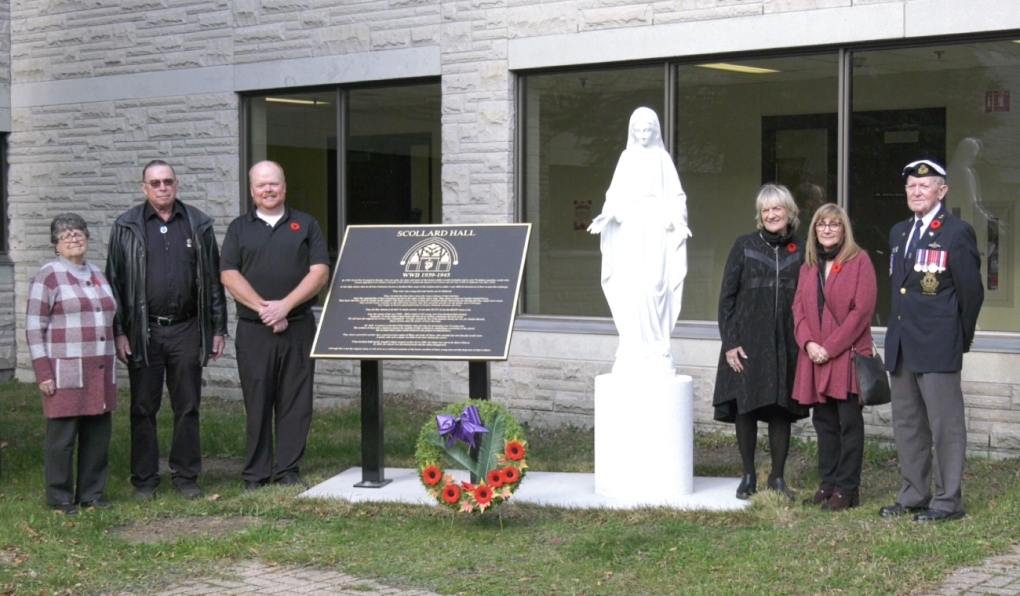 St. Joseph-Scollard Hall Catholic School held a Remembrance Day ceremony Thursday, paying respects to the Scollard 31 and the 352 people from the school who fought in the Second World War. (Eric Taschner/CTV News)

So retired school teachers Peter Gavan, Al Orlando, principal Derek Belanger, along with alumni Bob Lucenti and Vezina decided to commission a new statue along with a plaque were unveiled in the school's courtyard.

"To me, it’s a heartwarming tribute to the boys. These 31 and the others were doing what they're doing,” said Colin Vezina.

“Worrying about exams, hooting and hollering and eating mom's cooking. They suddenly found themselves killing people.”

He spoke to students during the ceremony, encouraging them to take a few minutes to walk by the plaque and statue to say a prayer.

“Think of the sacrifice made and please God, we don’t want to see any more from Scollard or any more wars,” he said.

“They left here as boy soldiers and some came back home as hardened men.”

Gerald Laronde had similar sentiments for the student body.

"It's good we all take a few minutes to appreciate the sacrifice,” he said.

Police have released a video of a driver who smashed a vehicle through the doors of Vaughan, Ont. mall early Wednesday before allegedly breaking into an electronics store.