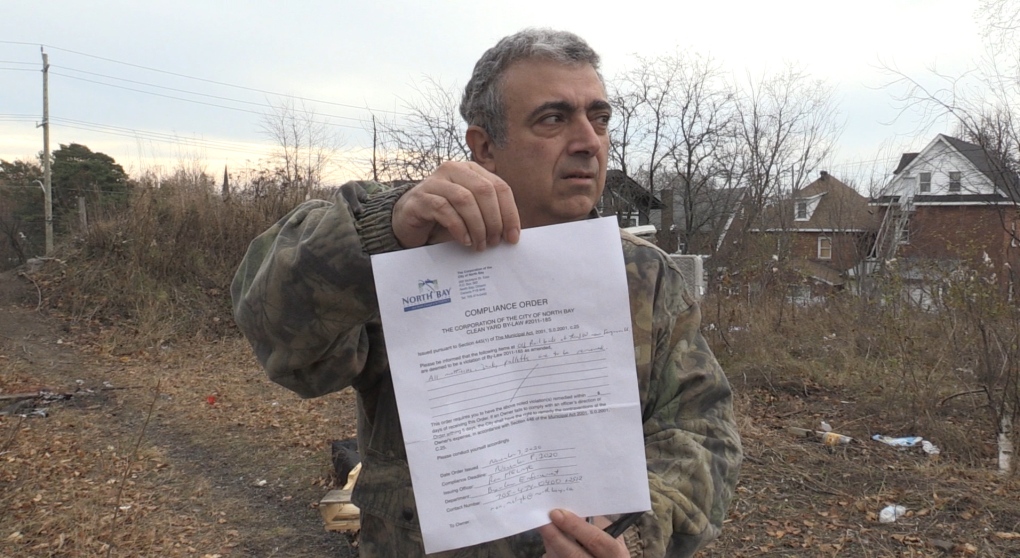 Joe Sinicrope received the letter in the mail Tuesday and wants it rescinded. (Eric Taschner/CTV News)

NORTH BAY -- A North Bay property owner is fuming after he was served a compliance order from bylaw enforcement because homeless people have been leaving garbage on his vacant property.

Joe Sinicrope received the letter in the mail Tuesday and wants it rescinded. He said it's not fair.

Sinicrope and his wife, Pauline, found garbage near their vacant land at the corner of Third Avenue West and Ferguson Street almost two weeks ago.

They immediately cleaned it up with no issues. The problem persisted. Charred remains of fire pits and a shelter made of mattresses and pallets are cluttered on the property.

"There's never been an issue until now," said Sinicrope.

When checking for mail, he was bewildered to find a compliance order from the City of North Bay's bylaw enforcement regarding makeshift homeless shelters and garbage on the property.

"There's a homeless problem in this city and the city is doing nothing about it but put it on the back of taxpayers," he said.

All yards must be maintained

Ron Melnyk, North Bay's bylaw enforcement coordinator, said the city's Clean Yards bylaw states all residential yards must be well maintained without any garbage or debris visible from the street.

"The city doesn't remove or haul garbage away from private property at the city's expense," said Melnyk.

Sinicrope has five days to clean the property. Bylaw enforcement could give him extra time to clean it up or issue a $110 fine. But, Sinicrope isn't going down without a fight. He wants the compliance order rescinded.

"What are they doing?" he said, referring to the city's response to the growing increase in the homeless population. "There's not enough places or beds for these homeless people. We get this compliance letter out of the blue and not even receive a telephone call."

But, Melnyk said, the bylaw is the law.

City Councillor Scott Robertson said all property owners have the responsibility of maintaining their own property.

"We know that vacant and derelict properties and buildings have a detrimental affect on the community as a whole," he said.

Robertson is proposing a service level change in the upcoming budget.

"It's to tighten up our property standards and introduce a vacant-derelict bylaw that will provide disincentives for irresponsible property ownership," said Robertson.

Sinicrope said he has no problem cleaning up the land, but he is concerned about kicking the homeless person off his property, feeling uneasy for their safety with nowhere for them to stay.