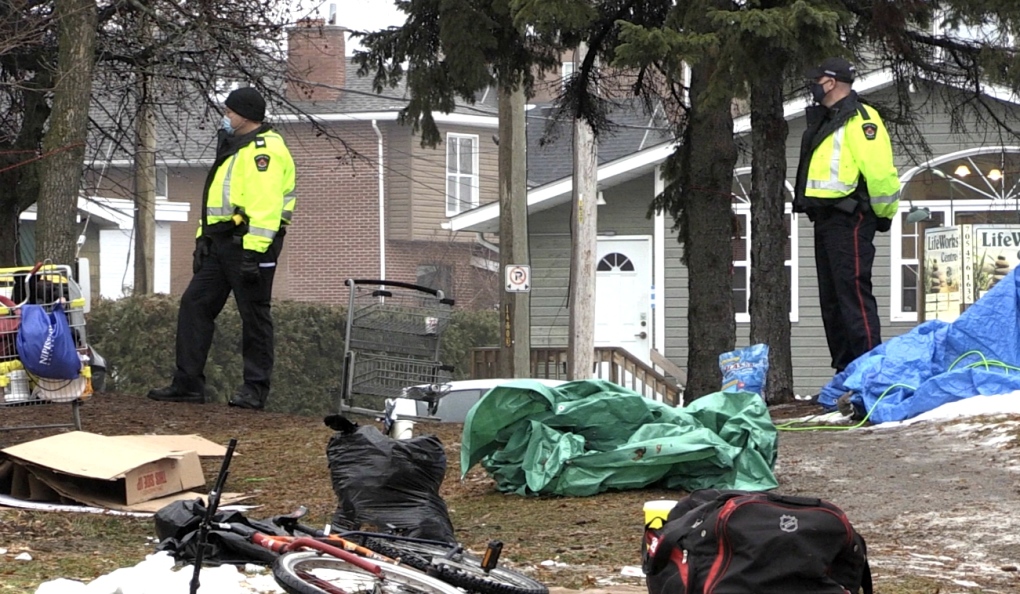 Residents who have been camping outside North Bay’s city hall got an eviction notice Thursday morning, with city bylaw officials moving in at 2 p.m. to dismantle the makeshift camp. (Alana Pickrell/CTV News)

NORTH BAY -- It’s been about two weeks since a second tent city popped up outside of North Bay's city hall, but officials say it will be removed by end of the day Thursday no matter what.

Around 2 p.m. Thursday, bylaw staff moved in and began dismantling the tents and clearing the area.

The first tent city appeared in September outside city hall, to help raise awareness and advocate for the homeless population in the city, however this one has more residents and tents.

Thursday morning, several organizations and groups were on hand trying to find accommodations and help for those who have been living there for the past several days.

“It is a vulnerable population primarily, that’s why all the social workers are there,” said bylaw enforcement coordinator Ron Melnyk. “(They’re) getting locations for people to go, offer locations, offering to keep their equipment safe, all of their personal belongings to keep it safe and that’s very important to these people. So that’s being offered as we speak.

"And when it comes down to it, in the very end, if someone just refused all help, then unfortunately they’ll be removed from the property.”

North Bay Police have been on scene all day to help keep the peace.

The City of North Bay said after trying to achieve voluntary compliance for the last two weeks, it is enforcing its bylaw. City law prohibits camping on the property. However, officials say it’s a safety issue, as well.

“It’s at the point where it’s become more of a safety issue,” said Melnyk. “The weather’s getting colder, so there’s always issues with heating sources and things like that. So there’s a number of safety issues that … can be catastrophic.”

"The city has been working with social services and other community agencies for more than a week to achieve voluntary compliance and to inform those in the encampment of shelter options and other assistance available to them," the city said.

However, those who have been residing at city hall say they don't trust what the city is offering them.

“The thing is, what they’re offering is probably going to be the low-barrier shelter, the crisis centre and a whole bunch of hotel rooms which isn’t going to happen no more,” said Shane Moyer, who has been a huge advocate on this issue. “Its not going to fly because we don’t trust the staff, we don’t trust the people in the shelters, and we don’t want a room where were going to be kicked out two or three days later and that’s the bottom line of it.”

Despite being told no one will be turned away from the crisis centre, Moyer said he and others have experienced otherwise.

“The minute people enter in the front door, it’s like the staff are trying to push you right out the back door over at the crisis centre,” said Moyer.

“When I was released there two weeks ago on Nov. 13 … I was suppose to go down to the crisis centre and get signed in there and the crisis centre wouldn’t take me in,” said Aaron Desrouchers, who has been homeless for four years in the city and was recently released from jail.

“They denied me right at the doors and not just on Nov. 13, but they also did it there two months ago, as well.”

CTV News has reached out to the Crisis Centre for comment and hadn’t received a response before publication.

Affordable housing and the need for more housing was brought up several times on Thursday.

“It’s basically the lack of housing in general and (Mayor) Al McDonald bringing in all these businesses instead of putting in new apartment buildings, new housing for the homeless and the people in need,” said Desrouchers.

However, Moyer says that isn’t the only issue that needs to be addressed.

“There’s many problems at the low-barrier shelter with, you know, certain health issues up there," he said. "You know, cots need to be replaced, that’s a given.”

The city said an outreach team, including social service agency staff, will be onsite to help connect people with housing and support service.

The city said anyone who “would like assistance will be offered warm shelter with support services and a safe place to store their belongings.”

Adding that those who want to protest are more then welcome on city property, however, tents and staying overnight are not permitted.

“They have a problem with the tents, but you know what, the tents will come with us and if need be we’ll set them right back up again,” said Moyer. “You know, because if we don’t like their offer, then you know, what are they going to do? They can’t jail us all.”