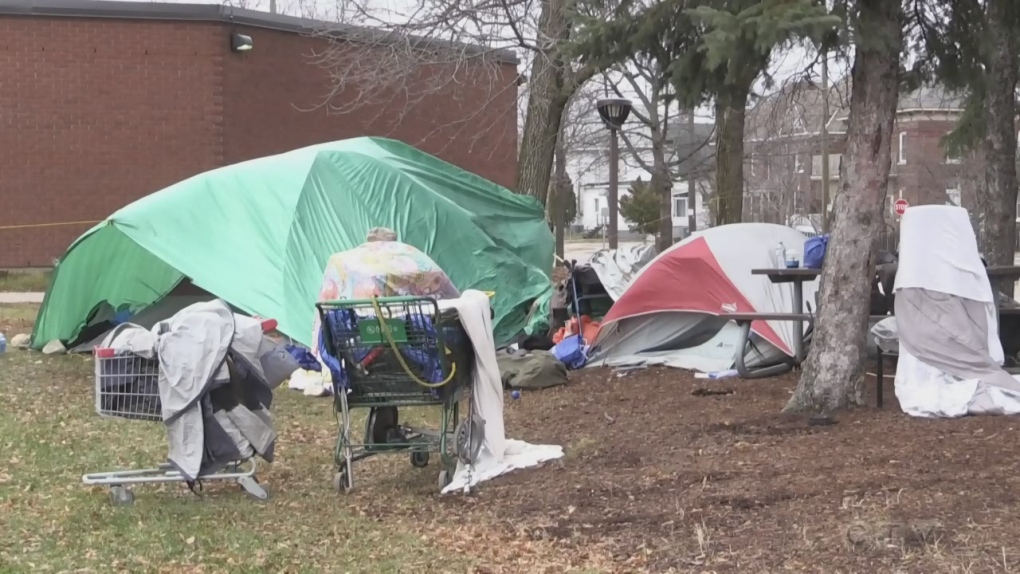 For the second time in less than two months, a tent city has popped up in front of North Bay city hall. Nov. 16/20 (Eric Taschner/CTV Northern Ontario)

SUDBURY -- The City of North Bay said after trying to achieve voluntary compliance, it is enforcing its bylaw and will be removing the tent city set up outside city hall, in a statement Thursday morning.

The encampment is the second in less than two months, with the first one popping up in September to raise awareness about the escalating homelessness issue in the city, exacerbated by the COVID-19 pandemic. It was removed after a confrontation with a city bylaw officer.

"The city has been working with social services and other community agencies for more than a week to achieve voluntary compliance and to inform those in the encampment of shelter options and other assistance available to them," the city said.

"While the city respects people’s right to protest, its primary concern is the well-being of those in the encampment while balancing its responsibility to maintain public health and safety. As the encampment has expanded, so have the risks associated with the personal security of the individuals on site, propane tanks, generators, open flames, sanitation and cold weather," the city said. "All those staying in the encampment are welcome to return daily to city hall to protest and advocate for better housing and system improvements."

The city said an outreach team including social service agency staff will be on-site to help connect people with housing and support service.

"Those who would like assistance will be offered warm shelter with support services and a safe place to store their belongings," the city said.

More to come on this developing story.