North Bay couple thanks their military family with lawn display

When Remembrance Day arrives, Ted and Ann Myers remember and reflect. They remember their loved ones who fought for our country in both world wars.

Ted built a Remembrance Day display and the couple decorates their lawn with the display every year. It’s made up of 14 crosses that stand row on row and a soldier kneeling at the base of a cross.

Each cross has the name of a different relative on it that fought in the First World War and the Second World War.

“For my side of the family, my dad was in the navy and he was on a number of different ships," said Ann. "He was mostly up in the North Sea. I had uncles in the army …I have an older brother who was in the army. We wouldn’t have the country we have without them.”

One of the names displayed is Ted’s grandfather, Pte. Milton Myers. He was deployed overseas from 1914-1918, where he was wounded twice. Milton was a scout whose job was to spy on the Germans.

He saved a French prisoner of war in 1916 and was awarded a medal for his bravery in the field. 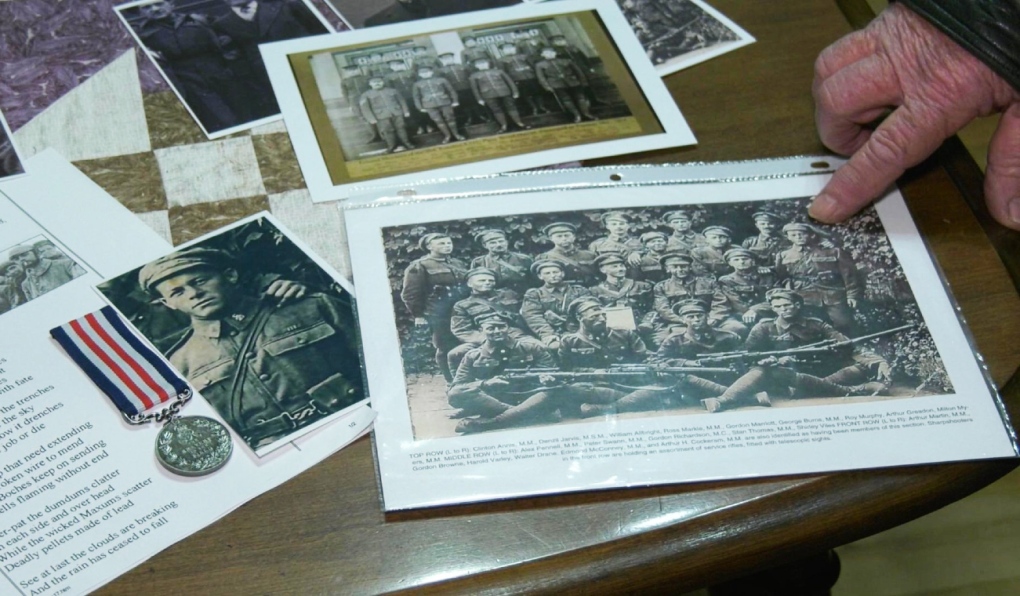 When Remembrance Day arrives, Ted and Ann Myers remember and reflect. They remember their loved ones who fought for our country in both world wars. (Eric Taschner/CTV News)

“One of his missions, he could hear the Germans talking," said Ted. "He and some other officers were walking in the trenches and he came across a French officer sitting there and he asked him what he was doing and he said he was a prisoner of war. And he said 'Not any longer. C’mon I’ll take you back.'”

All of the men on the crosses have since passed away. Two of them were killed in action. Ted’s great uncle Edward died in Sicily during the Italian Campaign in the Second World War.

Alfred Myers was killed during the Battle of Vimy Ridge. He was only in his early 20s. Almost 3,600 Canadian soldiers were killed in that difficult First World War battle.

“He’s buried there and his name is on Vimy Ridge, which we’re very proud of,” said Ted. “Some people have to realize that these men saw and did things that we will never see or have to do.”

The Myers said they’re always grateful for family who fought for freedom, and in some cases, made the ultimate sacrifice. Around this time of remembrance, they also think about the other Canadian men and women who served and still serve today. One of their sons even served in the militia.

“Just be thankful for the freedoms that we have now, which we probably would not have if things were different,” said Ann.

The Myers hope those driving or walking by their home will stop for a second, look at the crosses and reflect.