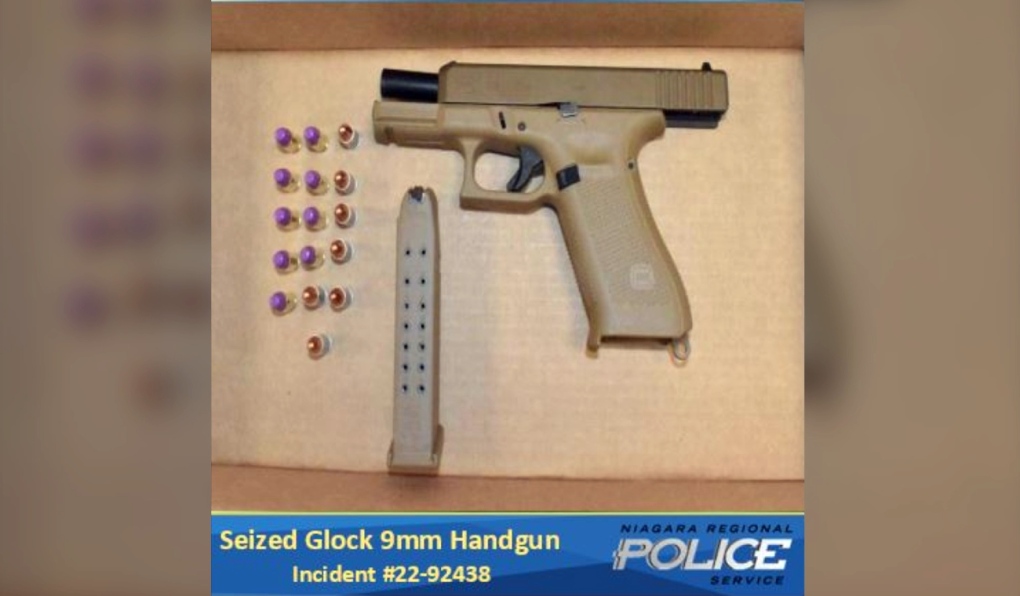 During the arrest, officers found a loaded Glock 9mm handgun inside a satchel being worn by the accused. (Provided)

A 26-year-old from London, Ont., accused of armed robbery involving a firearm in North Bay on July 26 has been arrested in southern Ontario, police say.

Acting on an Aug. 16 tip from North Bay police, Niagara Regional Police Services found the suspect in the area of Montebello Park of St. Catharines shortly after 9 a.m. on Aug. 17.

In addition to the firearm-related charges in connection with the robbery, the 26-year-old has also been charged with:

During the arrest, officers found a loaded Glock 9mm handgun inside a satchel being worn by the accused.

As a result, he is also charged with an additional five weapons-related charges.

North Bay police responded to a report of a home invasion at a residence in the 800 block of High Street that occurred shortly after 5:15 p.m. on July 26. Three suspects forced their way into the home while holding a weapon, then stole items from the home and fled. One of the two occupants that were home suffered minor injuries.

The accused remains in police custody pending a bail hearing to be held via video link on Aug. 18.

None of these allegations have not been proven in court.

As part of the charges related to the robbery in North Bay on July 26 the accused was charged with the following firearm-related offenses:

Ceremonies, marches and other gatherings are taking place across the country Friday as communities mark the National Day of Truth and Reconciliation. The federal statutory holiday was established last year to remember children who died while being forced to attend residential schools, as well as those who survived, and the families and communities still affected by lasting trauma.

Russia vetoed a UN resolution Friday that would have condemned its referendums in four Ukrainian regions as illegal, declared them invalid and urged all countries not to recognize any annexation of the territory claimed by Moscow.

Newly appointed president of the Canadian Medical Association, Dr. Alika Lafontaine shares what the organization plans to do in helping save the country’s collapsing health-care system.