'Nightmare is over': Timmins man beats severe COVID-19 after month on ventilator 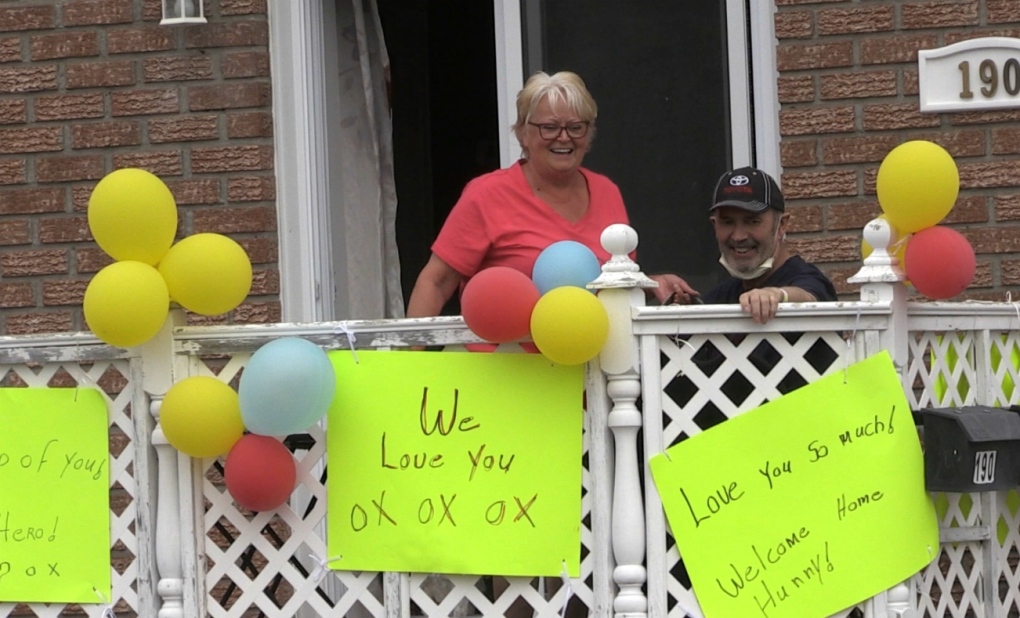 Carole and Graham Bushey wave during a welcome home parade Wednesday in Timmins. Graham,. who preferred not to speak with the media as he recovers, beat COVID-19 after a difficult battle. (Sergio Arangio/CTV News)

That made it even more delightful for family and friends to learn Bushey beat the disease after two months in hospital and could finally return home.

“He is a walking miracle, he really is,” Gagne said. “Today is the end of this nightmare and the beginning of a new journey.”

An otherwise healthy man before contracting the virus, Gagne said Bushey was put on a ventilator two days after being admitted to hospital. He stayed intubated in Timmins for 23 days, she said, before being transferred to Health Sciences North in Sudbury for further treatment.

Bushey stayed intubated there for another three days before he was well enough to breathe on his own. He has since transferred back to the Timmins hospital for physiotherapy, which Gagne said he took to so well, medical staff released him a month early.

Making things more difficult, Gagne works at the Timmins hospital as an emergency department clerk. She said being steps away from her father, but unable to help him, made the ordeal especially frustrating.

Family and friends arranged a welcome home parade outside of Bushey’s house, with signs full of love and encouragement.

“So proud of you! True Hero!” reads one of them.

Gagne said the message also applies to her mother, who was only able to see her husband through FaceTime, and to the health workers that made it possible for Gagne’s father to survive the ordeal.

It has been a hard two months, she said, but her stepfather is “a tough guy” and now it’s time for him to focus on a full recovery.

“He made it,” Laramee said with a smile. “It’s time to celebrate a little bit, let them rest. Everybody can sleep easy tonight.”

‘It could affect you at any day’

Now on the other side of the ordeal, Gagne said the situation could have turned out very differently. That’s something Gagne said she hopes everyone else to take away from this.

“People really need to stick together and go through this together, but make sure they take it seriously, as well. It could affect you at any day,” said Gagne.