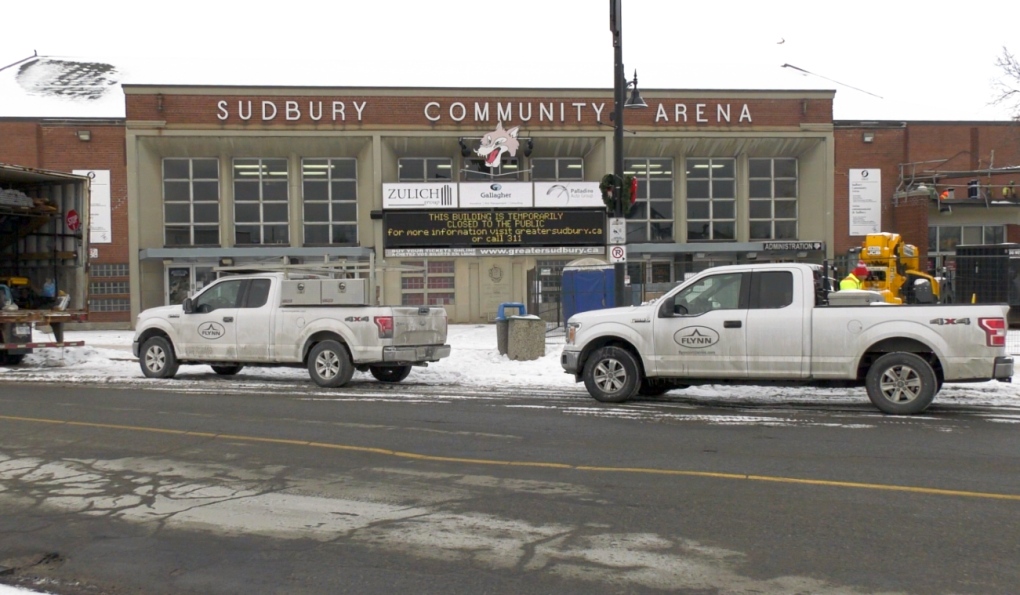 SUDBURY -- A few Sudbury city councillors appeared to be surprised at their meeting Wednesday as staff were directed to take a second look at two sites downtown for a new Sudbury Arena.

Mayor Brian Bigger had been asking for the report but some, like Ward 5 Coun. Robert Kirwan, didn't expect to see two options: the renovation of the old Sudbury Community Arena and a new build in the parking lot between Shaughnessy and Minto Streets.

"I can't believe what I just heard tonight," Kirwan said in the meeting.

The Kingsway site had been voted on by council more than three years ago, but the project became embroiled in litigation and hundreds of thousands of dollars have been spent in court costs.

"When the mayor made the announcement on Jan. 12, it was just supposed to be an update on the KED (Kingsway Entertainment District), so we knew where all the partners were sitting and we could dispel a lot of the myths and rumours that were flying around the community," Kirwan later told CTV News.

He said they're cognizant of the fact there have been a lot of changes since 2017, which is why the city was going to delay the construction until the pandemic was over.

Open to a referendum

"This truly opens up the debate for a referendum, which would put the 2022 election all about the arena," Kirwan said. "There's no need for that but that's where this is heading."

Bigger defended his actions. While this has been a divisive issue for many, he said most of council agrees more information is required before they proceed.

He wants all the facts or cards laid out on the table before they proceed. His plan could also give stakeholders or partners time to reaffirm their commitment to the project, which is thought to be one of the largest municipal projects ever undertaken by the Greater Sudbury.

"Last night was just a confirmation of the direction that we're taking with a report to be developed by staff, with a framework to be developed and presented to council on Feb. 9," he said.

Bigger said he's heard from the public and said they want to see a detailed report to make sure it's heading in the right direction.

When asked if this was a reversal or if he was changing his mind about the Kingsway project, this is what the mayor said:

"Four years ago, the decision resulted in a tie on the location. We knew that we had two very close options at the time, one being downtown and the other being at the Kingsway site," said Bigger. "I'm not asking for a recommendation from staff, however, I'm asking for an update that pulls the information together and synthesizes it and perhaps separates some misinformation that might be out there."

He said this will also give council the opportunity to evaluate any threats or opportunities when they do decide to move ahead with the arena.

In terms of how the project's partners or stakeholders will view the move, the mayor said he, like many around the table, voted for an arena and an events centre.

"This is a signal that the city and city council are interested in moving forward and so that's what this is attempting to do, ensuring that we have the best, possible information in order to move forward," he said.

The move is already being seen by some as a step back towards the downtown.

Ward 1 Coun. Mark Signoretti has been a vocal opponent of moving the arena. He said COVID has changed the business climate and it's incumbent on city councillors to make sure they have all the information they need before the city proceeds.

"I was pleasantly surprised and also happy to hear that the mayor is looking to evaluate not only the options of the KED, but also the options of Shaughnessy/Minto and as well the current arena," he said. "In renovating, we heard that Project Now would look at renovating the current arena to save the taxpayers money and in this global pandemic, especially because we're dealing with the budget at the current time, we need to look for savings and efficiencies."

Signoretti said there have been concerns with some of the project's partners that they're having their "difficulties or challenges" in the pandemic.

But Ward 11 Coun. Bill Leduc said he's talked to those partners and the idea they're having difficulties is nothing but more myth.

Leduc said Gateway Casinos is ready to move ahead and is still committed to the project.

He said that area in the city is the only area zoned for a casino.

"I wasn't impressed with last night because the mayor had asked for a report specifically around the Kingsway Entertainment District, now the report is coming back with alternative sites which are two sites downtown," Leduc said.

"If council's desire is to re-evaluate the site, then I think we should be re-evaluating all our options including the library, art gallery and maybe we should put a pause on everything and keep our focus on our infrastructure, mainly our roads, our homeless and the opioid crisis that we're facing in the city at this point in time."

Roughly $2.6 million has already been spent on the new arena and the KED.

The report is not expected to be ready until at least late spring.