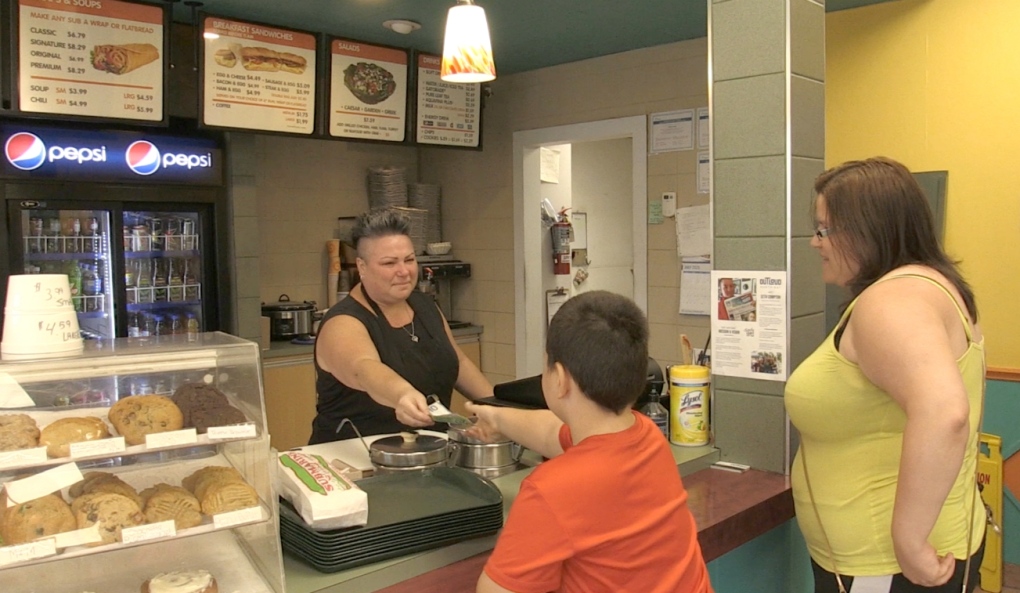 Donations are pouring in at Between The Bun after a donation box to support Outloud North Bay was stolen Wednesday night. (Eric Taschner/CTV News)

NORTH BAY -- Donations are pouring in at 'Between The Bun' after a donation box was stolen Wednesday night.

Restaurant owner Paul Chaput was working at the time of the theft and said a customer stole the box while waiting for his meal.

"When I realized it was gone, I first thought it was put somewhere else," said Chaput. "Then I realized, I said 'It's not just disappeared.' … I served the young gentleman that took the box."

There was more than $200 in the box and it was meant to go to Outloud North Bay, a local LGBTQ+ hub space for children and families, to help with the cost of upkeep.

"I was upset," said owner Seth Compton. "The staff here and the owner here have done good things for Outloud North Bay."

The restaurant said it has been extremely difficult to get donations for Outloud North Bay because of the COVID-19 pandemic.

"It's been really tough to raise money," said restaurant manager Lucie St. John. "Seth has been putting his own money into it."

After hearing about the theft, several local businesses and customers left generous donations, which total more than $1,000.

"It's been one person after another bringing money and donations," said St. John. "My heart is full of gratitude."

Compton arrived to pick up some of the donated money and said seeing the generosity assures him North Bay is a giving city.

"I got up this morning and shed a few tears," said Compton. "It's heartwarming to see a community coming together."

Every Tuesday, Between The Bun staff wear shirts supporting Outloud North Bay and the LGBTQ+ community.

All tips on Tuesdays are donated to Outloud. Due to the theft, the restaurant decided all tips accepted on Thursday are going directly to the hub space, as well.

The owners have a simple message for the thief.

"I hope you really have time to sit down and think about what you're doing with your life," said Chaput.

The restaurant and Outloud said they are thankful customers and the community as a whole stepped up to replace the stolen cash.

If you want to make a donation, you can visit Between The Bun or donate through Outloud North Bay's website.