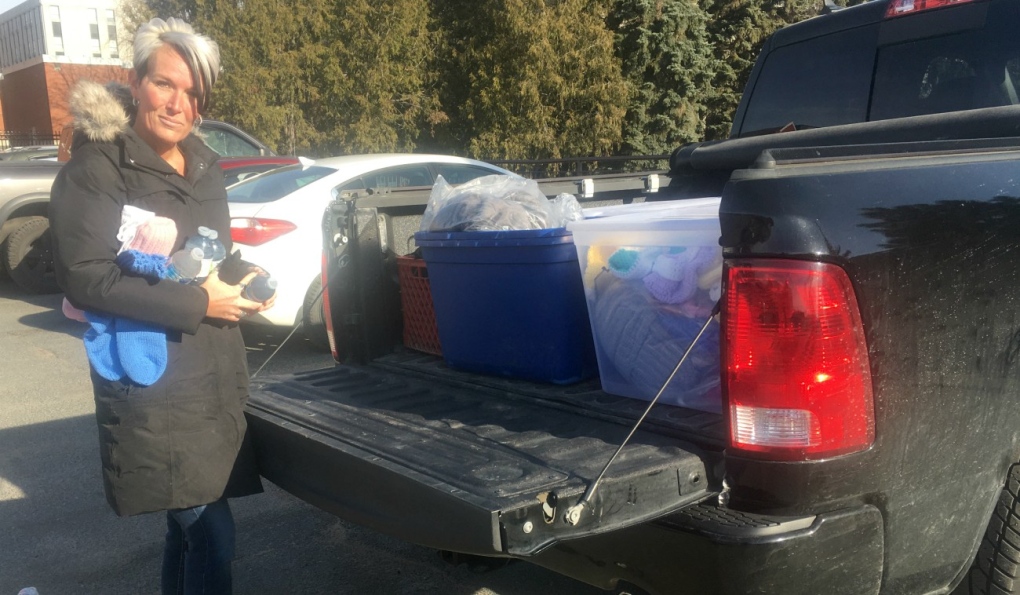 Northern Ontario musician Melissa Poitras Belanger is seen with items she collected for vulnerable people in downtown Sudbury. She has released a new music video to draw awareness to the opioid crisis and the homelessness epidemic in Sudbury. (Alana Everson/CTV News)

SUDBURY -- A northern Ontario musician has released a new music video to draw awareness to the opioid crisis and the homelessness epidemic in Sudbury.

Melissa Poitras Belanger did a cover of the song 'Somebody's Someone,' written by Nashville-based Daphne Willis.

The musician shares graphic scenes of life on the streets in Sudbury in her video.

"What we showed in the video is just a fraction of what's going on, it could have been a lot more graphic," Poitras Belanger said. "And we used as much respect, so, you know, they could keep their dignity. As we built relationships with these people, I asked them if they wanted to be filmed and if they wanted to tell their story, and the participants that are in the video agreed."

She knows the issues first-hand from volunteering to distribute food, clothes and supplies to help those in need in the downtown area.

Something had to be done

"Being out with these people and building relationships and trust and connections with these people, I just knew that something had to be done and we had to be their voice and I naturally gravitated to my music.," said Poitras Belanger.

Denise Sandul is in the video. She lost her son, Myles, who suffered from schizophrenia, to a drug overdose downtown two months ago.

"I knew it was going to bring attention to what these people are facing this winter and the fact that people would not be able to ignore the video," said Sandul.

Poitras Belanger said she hopes the video will help, in some way, overcome the stigma vulnerable people face.

"It's everywhere and these people feel like nobody is listening," she said. "So what better way to support them and get the awareness out?"

Poitras Belanger said she has deep compassion for what's happening. When she's out volunteering on the streets to help the vulnerable, she said she is constantly reminded that these people are 'Somebody's Someone.'