It was a close call for a Timmins driver early Monday morning when what looked like a puddle turned out to be a big sinkhole.

Timmins police were called to Bonaventure Street following the incident. 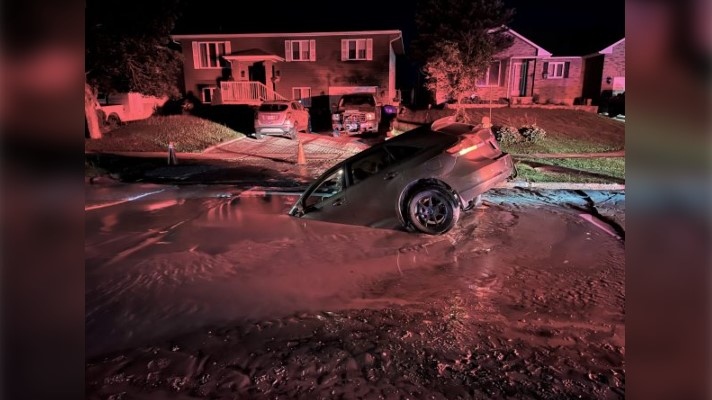 SUV in a sinkhole on Bonaventure Street in Timmins. June 20/22 (Timmins Police Service)

"The driver of the Toyota passenger vehicle escaped without injury," Timmins police said in a news release.

"City crews are actively working on making the necessary repairs. Caution is called for in this area for the time being."

It is unclear what caused the sinkhole.

"That is a public works matter. Our involvement ceased after the vehicle was extricated and the collision report was complete," Timmins police told CTV News in an email when asked for more information.

CTV News has reached out to the City of Timmins for more information and is awaiting a response.

Although crews have temporarily fixed the problem and are planning a permanent repair, the road is closed until further notice, the city said in a tweet.

There is no information suggesting the two incidents are related.

The House of Commons Public Safety and National Security Committee is set to meet today to discuss allegations of political interference in the 2020 mass shooting in Nova Scotia.

Canada's inflation rate slows to 7.6 per cent in July as gas prices fall

OPINION | Economists are forecasting a recession, how should you prepare?

Explosions and fires ripped through an ammunition depot in Russia-annexed Crimea on Tuesday in the second suspected Ukrainian attack on the peninsula in just over a week, forcing the evacuation of more than 3,000 people.

A mother from Florida shared an adorable video of her son's interaction with the family's dog.

A two-minute video posted to TikTok that shows a man berating two women for not speaking English at a Richmond, B.C., SkyTrain station is making the rounds on social media.