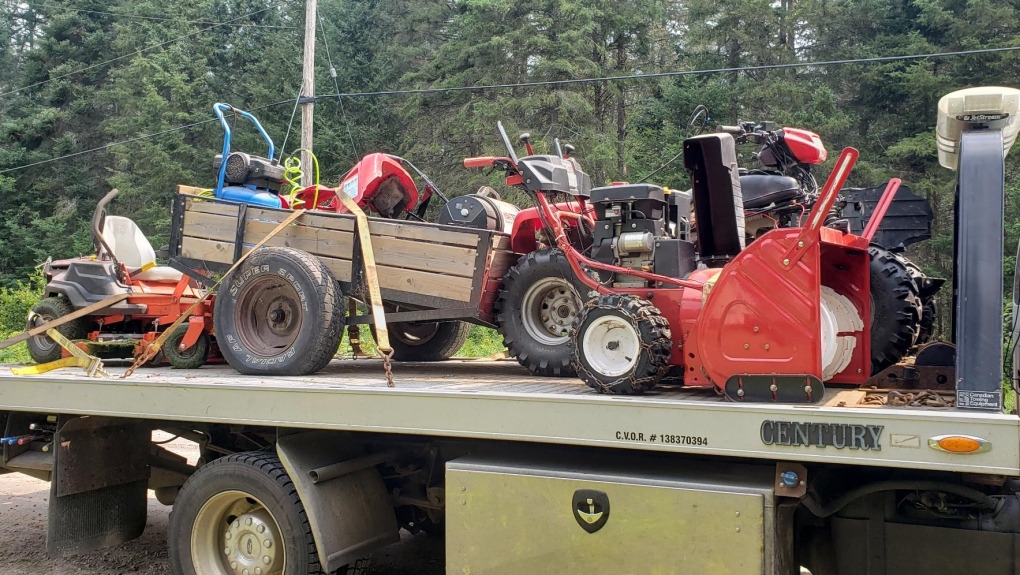 Two people have been arrested after a search at a home south of North Bay revealed a large stash of suspected stolen property, Ontario Provincial Police said.

Officers from the community street crime units in North Bay and Huntsville raided a home on Black Creek Road in Nipissing Township around 7:30 a.m. on Tuesday.

"More than $37,000 worth of stolen property was recovered," police said in a news release Thursday night.

Now, a 48-year-old man and a 49-year-old woman have been arrested and charged with two counts of altering/destroying/removing a vehicle identification number and having property obtained by crime.

The male accused is being held in custody pending a bail hearing while the woman was released and is scheduled to appear in court on Aug. 24 in North Bay.

Health Minister Patty Hajdu said she expects a submission from Pfizer in the coming weeks for the use of the company’s COVID-19 vaccine in children ages five to 11.

A Canada-wide warrant has been issued for a man who police say fled the Toronto area after allegedly killing an Ontario couple that disappeared earlier this month.

PM Trudeau to name new cabinet in October, Parliament to meet this fall

Prime Minister Justin Trudeau says that he intends to name his new cabinet in October, bring Parliament back 'before the end of fall,' and implement the promised federal vaccine mandate as soon as possible. Chrystia Freeland will continue as deputy prime Minister and finance minister, Trudeau said.

DEVELOPING | 35 of 39 miners trapped underground in Sudbury, Ont., have now been rescued

A total of 35 of the 39 people stuck underground at Vale's Totten Mine in Sudbury, Ont., have now been rescued, Vale reported late Tuesday afternoon. A team of doctors is on-site and checking workers as they emerge from underground.

Prime Minister Justin Trudeau says he hopes to share a decision on whether to ban Huawei Technologies from Canada's 5G wireless network rollout 'in the coming weeks.'

'She cannot have died in vain': Anniversary of Joyce Echaquan's death marked with calls to fight racism

A ceremony was held Tuesday marking the one-year anniversary of the death of Joyce Echaquan, an Indigenous woman who was humiliated by staff in a hospital northeast of Montreal as she lay dying, sparking outrage across the country.

Three people have been arrested in connection with what police are calling a 'million-dollar heist' from a business near Toronto Pearson International Airport last spring.