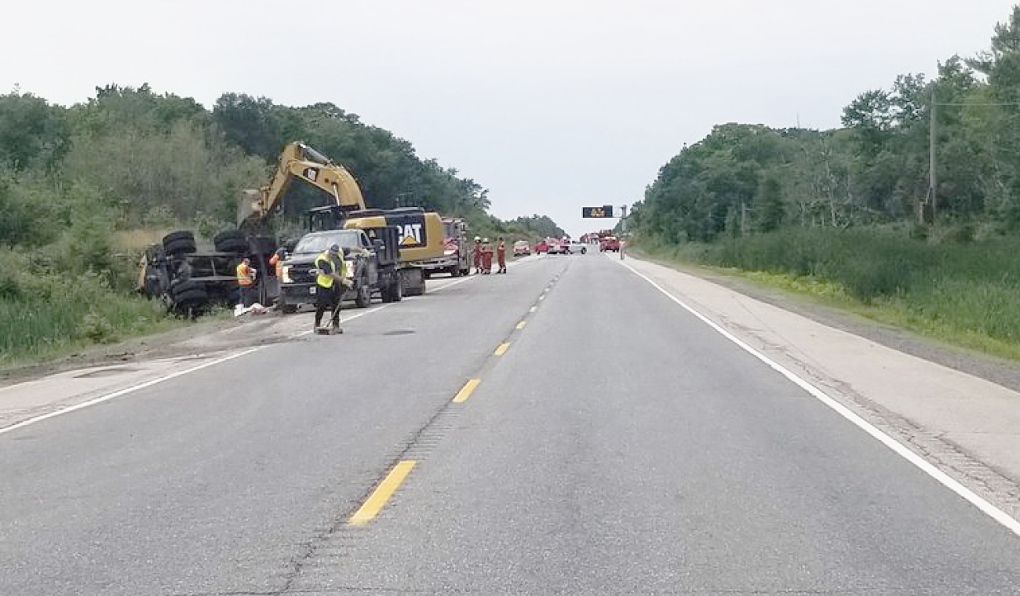 Ontario Provincial Police dealing with a serious, single-vehicle crash Thursday afternoon near Parry Sound say they caught three drivers looking at their cellphones as they passed the accident scene.

The collision took place around 12:30 p.m. on Highway 69 in Carling Township.

"The driver had to be extricated from the vehicle by Carling and McDougall Fire Services and was transported to hospital by Ornge, where treated for non-life threatening injuries," police said in a news release Friday.

"Highway 69 was closed at times, with periods of alternating traffic flow during the investigation. Officers laid three distracted driving charges while at the scene as drivers held their cellphones while passing the collision."

Police remind motorists that distracted driving is the No. 1 killer on Ontario roads, causing more deaths than impaired driving and speeding.

U.S. Justice Department officials and Huawei executive Meng Wanzhou have reached a deal to resolve the criminal charges against her, allowing the woman who has been at the centre of a years-long major geopolitical case to enter into a deferred prosecution agreement and be released, under certain terms.

New Brunswick will be returning to a state of emergency as the province continues to battle the growing fourth wave of COVID-19, officials announced Friday.

Gatineau police say the deaths of a father and his two young children at an Aylmer, Que. home were a double murder-suicide.

Indigenous Services Canada (ISC) is reporting that residents of the Saugeen First Nation in Ontario were given expired doses of the Pfizer COVID-19 vaccine for nearly a month before the error was caught.

A draft report of the election review in Arizona's largest county by supporters of former U.S. president Donald Trump found that current U.S. President Joe Biden did indeed win the 2020 presidential contest there, an embarrassing end to a bizarre quest to find evidence supporting Trump's false claim that he lost because of fraud.

U.S. Vice-President Kamala Harris' live interview on 'The View' was abruptly delayed Friday after two hosts of the talk show learned they had tested positive for COVID-19 moments before Harris was to join them on the set.

Alberta Premier Jason Kenney is confronting a full-throated justification for a pink slip thanks to his chronic tone-deafness during the pandemic, incredulously topped off by taking a two-week vacation in Europe this month as Albertans were dying from the consequences of his policies, writes Don Martin in his exclusive column for CTVNews.ca.