It was a scene that hospital officials, politicians and members of the city were disheartened to see: dozens of protestors gathered outside of Health Sciences North on Monday.

"They’re putting up barriers to access of care and this is wrong," said Nickel Belt MPP France Gelinas. "This is wrong. This should not be happening and it should be stopped."

Protestors gathered near the back entrance of HSN on Paris Street. They flooded the sidewalks, but no entrances were blocked or disrupted by the demonstration. However, that wasn't the case for all hospitals that were subjected to protests across the country Monday.

“It’s not OK that across the country, hospitals are having to put up barricades today to manage the mobs coming their way,” said Liberal Party Leader Justin Trudeau during a news conference.

With signs and Canadian flags in hand, protestors were vocal in promoting their beliefs.

"The main message is Canadians have a choice to determine, based on informed consent, whether they are ready at this point in time or not, to take a vaccine that is still in the trial basis," said David Hobbs, the People’s Party of Canada Candidate for Nickel Belt.

However, officials with the hospital said in an email to CTV News ahead of the protest that "the best way to support our employees and medical staff is to get vaccinated against COVID-19."

"We urge those exercising their right to freedom of expression to do so peacefully, and in a manner that is respectful to the patients and the health care workers performing their duties."

The Greater Sudbury Police tweeted Monday morning that officers would be on hand throughout the demonstration to ensure public safety, adding that "any disruptions to hospital operations/patient care will not be tolerated." 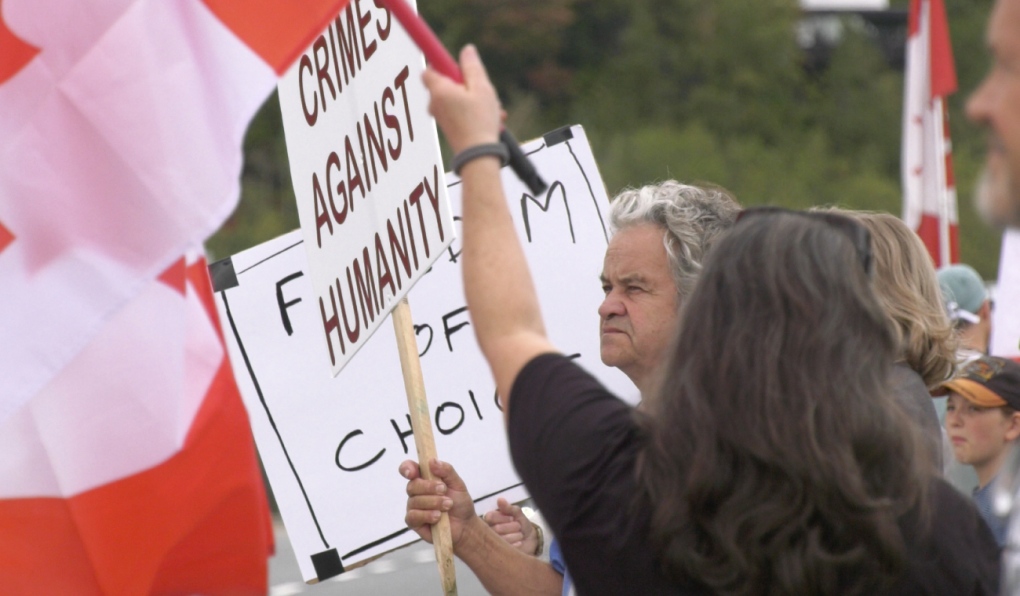 It was a scene that hospital officials, politicians and members of the city were disheartened to see: dozens of protestors gathered outside of Health Sciences North on Monday. (Alana Pickrell/CTV News)

For many, the problem wasn’t that protests were taking place, but instead that hospitals across Canada were being targeted as the location.

"Go and protest in front of politician’s offices or MPP offices where those decisions are made," said Gelinas. "Too many people need hospital services. It is a life-and-death situation often. Those are where they happen. They happen in our hospitals and any barriers to care and barriers to access to care, I cannot stand for this at all."

Sudbury MPP Jamie West even invited them to his office to protest, if they left healthcare workers alone.

"Outside of hospitals is not the place to have a protest like this, where people are trying to get cancer treatment, they’re trying to get health care. It feels intimidating for them," West said.

"I’ve been to many protests. I believe in freedom of speech, but let's have some consideration for the people who are entering these hospitals."

The Ontario Medical Association, representing the province’s doctors, and the Registered Nurses’ Association of Ontario, released a joint statement condemning anti-vaccine protests, specifically outside of hospitals.

"These COVID-19 heroes need the resources and supports to continue the battle," the statement said. "They cannot and must not be distracted, or worse, discouraged by protests at the doorsteps of their workplaces."

Health Sciences North was one of 19 hospitals targeted for protest on Monday. Now, many politicians are calling for legislation providing a safe bubble around hospitals and other health centres to prevent demonstrations like this from occurring.

"There are a lot of people with concerns about the vaccine who are politely just expressing their concerns," said West.

"The issue you’re having is an issue with the government. Not with hospitals. Not with workplaces."