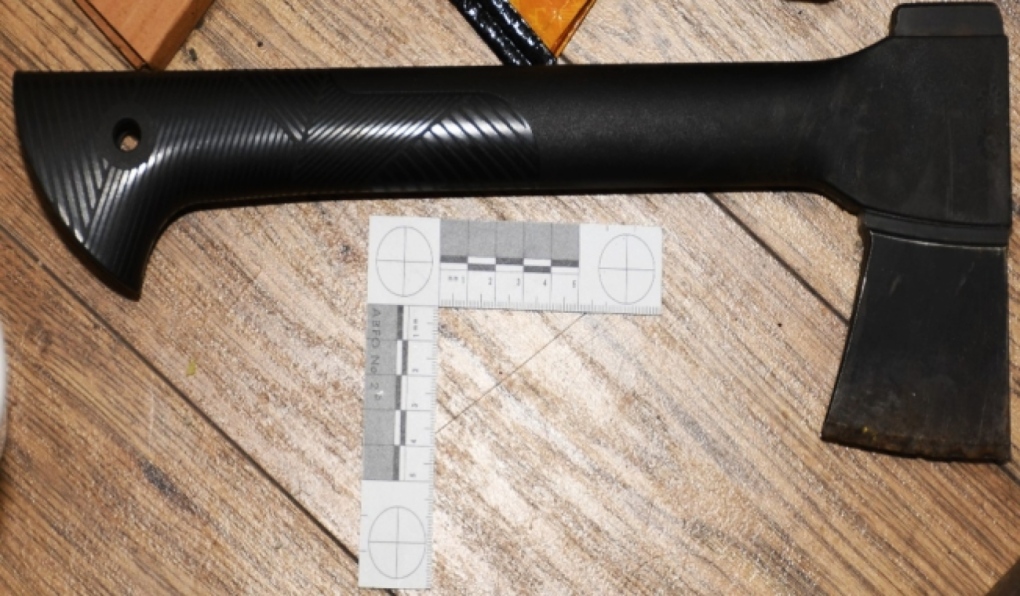 The hatchet brandished by the suspect is seen in this photo from the SIU. (Supplied)

Greater Sudbury Police were justified in using tear gas and firing a non-lethal weapon during an arrest March 31, according to the provincial body that investigates police.

The Special Investigations Unit released a detailed narrative this week of the man's arrest at a residence near the intersection of Lasalle Boulevard and Falconbridge Road. The SIU refers to the suspect as the complainant throughout the report.

"The complainant had reportedly struck his girlfriend the night before and the police were there to arrest him for assault," said the report from the SIU.

"The complainant’s father answered the door and advised the police that his son was present but would not present himself to be arrested without a warrant."

At that point, the complainant slammed the door and began threatening police, refusing requests to surrender. Officers at the scene then arranged to seek a warrant that would allow them to enter the apartment forcibly to arrest the man.

As more officers arrived, they set up containment around the suspect's basement apartment.

By 6:40 p.m., warrant in hand and the complainant still refusing to give himself up, the police changed their tactics.

"Two teams of tactical officers would breach the apartment’s kitchen and living room windows, whereupon they would direct the complainant to surrender into their custody," the SIU report said. 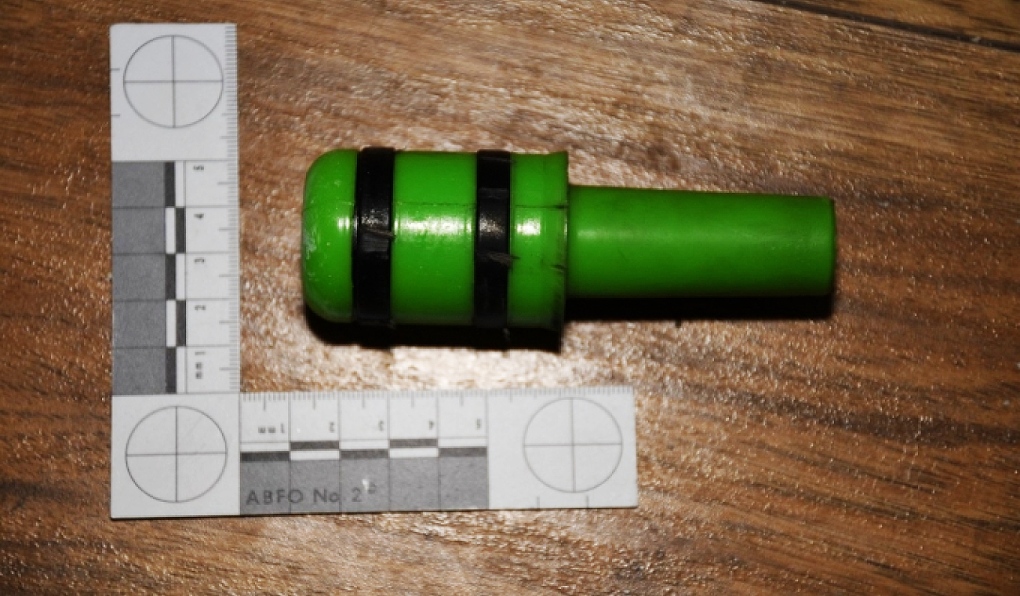 A round fired from the ARWEN during the arrest is seen in this photo from the SIU. (Supplied)

"If he refused, tear gas would be shot into the apartment in an effort to force him out."

At 7:20 p.m., police moved in, breaking windows and ordering the complainant to come out with nothing in his hands. He again refused.

Police fired two tear gas canisters, one of which the complainant threw back outside. They were also armed with a less-lethal device known as an ARWEN – a launcher that fires a range of less-lethal projectiles.

"Following the second tear gas deployment, the complainant went to his bedroom and returned to the living room with a hatchet in his hands," the SIU report said.

"Armed with an ARWEN and standing within metres of the smashed out living room window, (the officer) fired his weapon twice at the complainant. It is not known whether either ARWEN projectile struck the complainant."

The suspect, while unhurt, seems to have been unnerved by the projectiles.

"Shortly after the ARWEN discharges, the complainant dropped the hatchet and told the officers he was ready to surrender," the report said.

"At their commands, he positioned himself on the floor of his apartment in the area of his living room. Tactical officers entered through the broken windows and arrested the complainant without further incident."

SIU director Joseph Martino wrote in his analysis of the incident that police acted lawfully and reasonably throughout the incident.

"They had cause to believe that the complainant had committed a violent assault on his girlfriend and threatened the initial officers who attended at the apartment to arrest him," Martino wrote.

"The assault on the apartment would also appear a reasonable tactic in the circumstances."

Quebec's major party leaders are making one final appeal to voters ahead of Monday's provincial election.

After two years of COVID-19 restrictions curbing Halloween, Canadians are expected to ramp up celebrations this year. But the rising cost of goods and ongoing supply chain issues could put a kink in demand for costumes, candy and decorations.

Terry Bradshaw says he's been treated for 2 kinds of cancer

Hall of Fame quarterback Terry Bradshaw said Sunday he has been treated for two forms of cancer in the past year.

Brazil's top two presidential candidates will face each other in a runoff vote after neither got enough support to win outright Sunday in an election to decide if the country returns a leftist to the helm of the world's fourth-largest democracy or keeps the far-right incumbent in office..