Northern Game Expo is back

Northern Game Expo is back 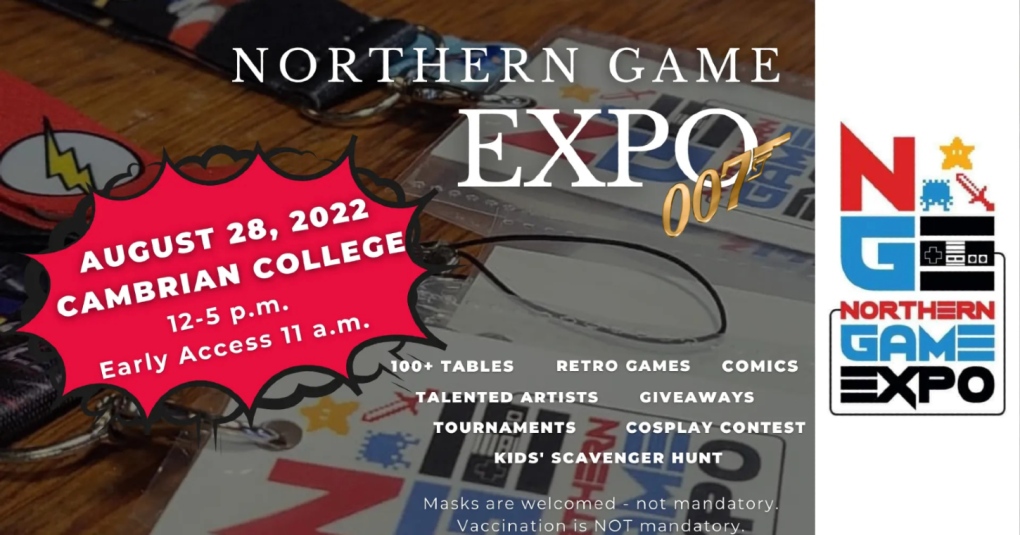 Cambrian College in Sudbury will again play host to retro and modern video gamers, card and comic collectors and cosplay enthusiasts this summer, on August 28, for Northern Game Expo 7. This year’s event will feature more than 100 tables with talented artists, comics, collectibles and more. (Supplied)

Cambrian College in Sudbury will again play host to retro and modern video gamers, card and comic collectors and cosplay enthusiasts this summer, on August 28, for Northern Game Expo 7. This year’s event will feature more than 100 tables with talented artists, comics, collectibles and more.

Brad Davidson, co-founder of the Northern Game Expo and local nostalgia gaming enthusiast, says they were inspired nine years ago attending the Barrie Game Exchange to establish an event tailored to video games in Sudbury.

“It is truly a family event; there is something for everyone,” said Davidson.

The organizers, Davidson, Jerrica Leblanc, Ashlee Paquette, Michael Shanks and Lindsay Vautour, are all excited for the event to have even more tables and more to offer than previously after the pandemic limited their last event.

This year’s event will feature vendors from as far as Vancouver and Montreal along with many locals. There will also a dedicated kids zone and children scavenger hunt, a cosplay contest, a GoldenEye 007 retro video game tournament sponsored by Comics North Hidden Level Games and a PS5 Giveway thanks to Studio 613 Electric Tattoo Co., Creature Caster and Great Canadian Games & Hobbies have stepped in as sponsors this year bringing more tabletop gaming experience to the event as well.

Local artist, Rob Sacchetto, whom specializes in zombie portraits will be returning to the event and will be painting a custom portrait for the winner of the cosplay contest.

Davidson says the annual event provides a safe space where people with a common interests can show off their skills, creativity and excitement for gaming.

The event will be held at the Cambrian College gym at 1400 Barrydowne Rd. from noon to 5 p.m. on August 28. Advanced VIP tickets will be available for purchase starting August 3 at Comics North Hidden Level Games for $15 or out of town guests can contact organizer, Michael Shanks, for advanced tickets. Advanced VIP tickets allow attendees exclusive access to the event one hour early at 11 a.m. General admission tickets can be purchased at the door for $10 and children 10 and under get in free with an accompanying adult.

Wood from primary forests in British Columbia has been used to fuel the U.K.'s largest power plant, according to a BBC investigation; the company denies the allegations.

The Toronto Blue Jays' first foe in the playoffs is now official.

The Invasive Species Council of B.C. is asking the public to report sightings of a 'highly toxic' plant that can leave people's skin blistered and burned – something one family recently learned the hard way.

California serial killer 'on a mission' in slayings, police say

A California serial killer seems to be 'on a mission' throughout the fatal shooting of six men and the wounding of one woman dating back to last year.