Recently, a northern Ontario man and his friends were hanging out in his shed on a Saturday night when a large moose came to join the party. The encounter was captured on video.

Jacob Rintala said the wild animal showed up about 10 p.m. at his shed on a farm in Wanup, just over 20 kilometres south of Sudbury.

"It was my first encounter with the moose. He came to say 'hi' and stuck around my farm for the rest of the weekend," Rintala told CTV News.

He said the animal was not aggressive at all and even let Rintala pet it several times. 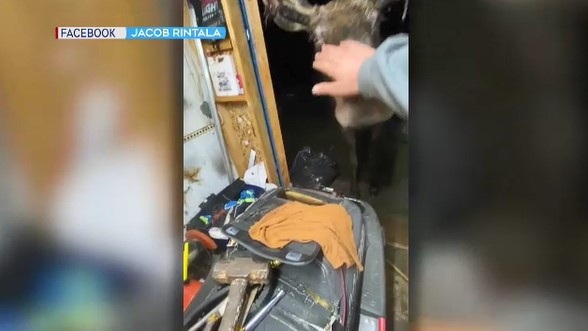 Petting a moose in northern Ontario

Morgan Kerekes, a spokesperson for the Ontario Ministry of Natural Resources and Forestry, told CTV News in an email it is difficult to estimate age based on the video, but the male moose's antler development would suggest it was a yearling or up to two-and-a-half years old.

"(It) stuck around all night. I left (the shed) at 3 a.m. and he was (there). (It) went to greet my dad at the front door of his house in the morning. He then went to lay down in the field beside the river for the remainder of the day," Rintala said.

Several behaviours exhibited in the video indicate the animal may have been infected with brain worm, which is often fatal.

Signs of brain worm infections in moose vary but can include:

"All ages of moose can be infected, but younger animals are generally affected more," Kerekes said.

She confirmed Rintala's belief that it is the same moose that was seen getting an Ontario Provincial Police escort a week later on Highway 69.

"The moose was charging its head, both into a motor vehicle and a seasonal residence causing property damage and safety concerns to the public," Lewis said. "The MNRF attended and was able to scare the animal away from the property rather than dispatching the animal."

Then on Oct. 2, OPP was called about a moose in the same area that was creating a danger to motorists on the highway by refusing to leave the roadway.

An Espanola woman recorded the sight and the video got a lot of attention online.

Unfortunately for the moose in the most recent video, police made the difficult choice to dispatch it in the interest of public safety.