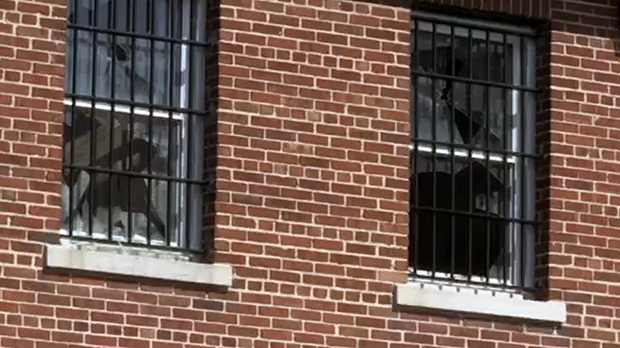 The aftermath of a riot this past weekend at the North Bay Jail is still visible.

The union representing guards at the North Bay Jail says there was a riot among prisoners Saturday night, and it lasted for hours.

Broken windows can still be seen from outside the jail. Repairs are underway.

The union president told CTV one correctional officer went to hospital with minor injuries. He said it's the third time an incident has taken place in the past five months.

"Right now we use every space that we possibly can and we're still lacking resources to help individuals."

The province confirmed the incident and issued a statement to CTV.

"There were no injuries reported by inmates and the ministry did not send anyone to hospital," reads the statement.

"North Bay Police and emergency services attended the facility, but did not participate in the active incident. The facility remains secure and staff are working on a damage assessment in one unit as a result of the disturbance. The ministry is investigating the incident."