Message in a bottle: Neighbours meet after discovery of memorial send-off 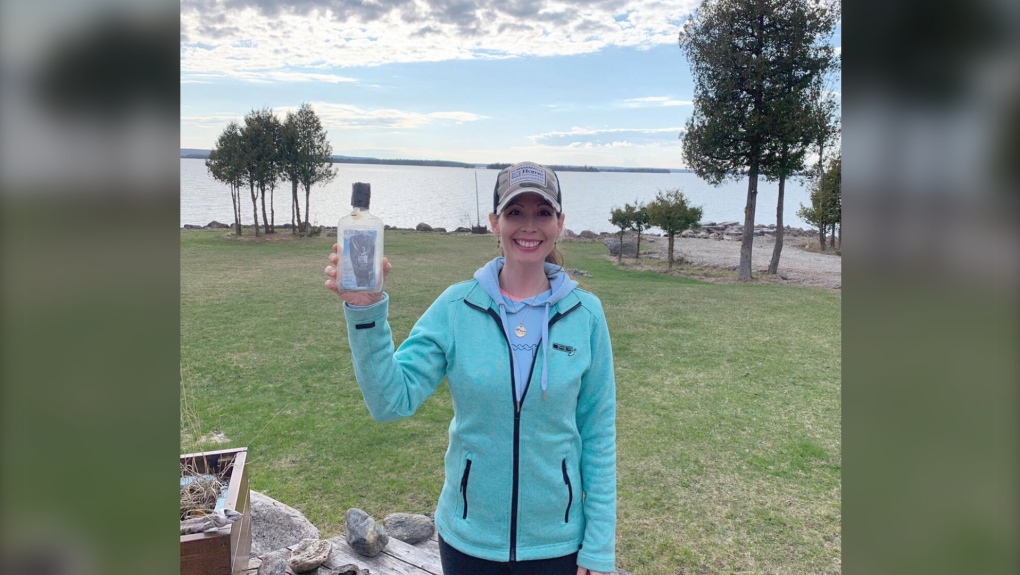 Shandelle Carrigan discovered the bottle while taking a walk along the shoreline. She has since reached out to Brandon's family. May 8/21 (Supplied)

"It changed our lives forever and you know to realise that it was a mistake on his part walking across the street and texting and could have been avoided. It just it saddens you," says Robyn Tollar, Brandon’s sister.

During a memorial service at the family’s camp on Manitoulin Island a message in a bottle was released.

Four and a half years later the bottle was found down the shore at a new neighbour’s property.

"I was taking a little walk on the shore line and when I was walking down there I happened to see this bottle and I could tell there was a piece of paper in it," said Shandelle Carrigan.

"There was a picture of Brandon and you could see the words son in heaven so as soon as I flipped it and saw that I knew that I had found something of significance. I just didn’t know what it was going to become."

Inside there was a poem, Brandon’s obituary, and some money.

"The ten dollar bill was placed in there like the paper stated purchase a drink in memory of Brandon. So with the information that was on the paper in the bottle, I did a google search and we actually came across the campaign for phones down eyes up," says Jason Poulton, Carrigan's boyfriend.

Brandon was on his way to meet friends at the local Tim Horton’s where he worked, when he was struck and killed by a pickup truck. His father, Tom Walli, believes the accident occurred when he was looking at his phone.

Tom’s employer, Geotab Inc., a telematics technology company headquartered in Oakville, Ont., wanted to help him raise awareness of the dangers of distracted walking and driving.

Both Tom and Brandon shared a love of music. In Brandon’s honour, over the past three years, the company has hosted a Phones Down, Eyes Up concert to raise awareness of distracted walking and driving.

This past year, due to COVID-19, the company held a virtual concert. They also set up and distributed five scholarships in Brandon’s memory in 2020 and more are planned for this year. They have created a video warning people of the dangers of distractions while walking or driving.

This is something that both Poulton and Carrigan connected with, as Poulton has three teenage boys of his own.

"Bad things can happen if you’re not paying attention and the last thing that any of us would want to see is somebody get hurt or killed in a situation using an electronic, so if campaign and our assistance with the campaign can even prevent even one injury one death then it’s worth it," says Poulton.

The families have connected and had an emotional virtual meeting on April 15. The original Facebook post, video, comments and photos of the virtual meeting can be viewed here.