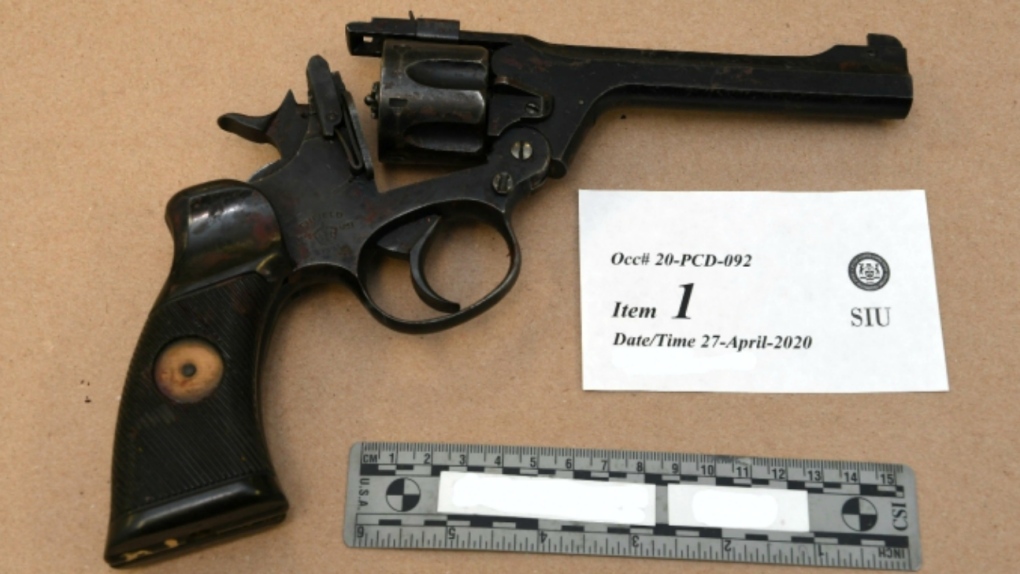 A 49-year-old Elliot Lake man shot himself with this revolver, the Special Investigations Unit has concluded in clearing police of wrongdoing. (Supplied)

SUDBURY -- An Elliot Lake man shot himself in the head last month because he was distraught about being arrested for violating his probation, Ontario's police watchdog said Thursday.

The Special Investigation Unit (SIU) said the man, 49, was in another room, separated from police by a glass partition, on April 20 when the death occurred.

It was a regularly scheduled check-in at the probation office, but two Ontario Provincial Police officers arrived to tell him he had breached probation and was under arrest.

The man was under a court "order not to be in the presence of anyone under the age of 16 unless in the company of an adult approved by the court," the SIU report said. "He had earlier in the month been seen in the company of a woman and her two children at a Shoppers Drug Mart store."

Upon hearing the news he was being taken into custody, he became extremely upset and told officers not to enter the room.

"The officers told the (man) that would not be possible as he was under arrest," the report said. "Shortly thereafter, (he) retrieved a handgun from his waistband, held it up to his chin and pulled the trigger."

Police, guns drawn, quickly entered the room "and administered life-saving measures," the report said. "Paramedics arrived at the scene and tended to the (man), but he could not be saved and was declared deceased at the scene."

The SIU is automatically called to investigate whenever a civilian is hurt or killed during an interaction with police.

SIU director Joseph Martino wrote in his report that police had tried to arrest the man earlier, but were unable to find him.

Officers followed proper procedures, he wrote, and based on his criminal record, had no reason to believe he would be carrying a gun.

"The officers had little time to react as the (man) retrieved his weapon and used it to shoot himself," Martino wrote. "Thereafter, the record indicates that (both OPP officers) did what they could to render medical aid while they waited for paramedics."

The investigation determined the man was alone responsible for his self-inflicted death, the report said, and thus there is no basis for proceeding with criminal charges in this case against any police officer.