CTV News has learned that the driver of a delivery transport lost control of the vehicle and was pulled into the ditch before the truck became pinned between a house and a hydro poll.

The owners of the house that was struck were at the back of the property in the garage at the time of the crash.

No one was injured.

The dramatic crash was caught on dashcam and was posted on Facebook shortly after it happened:

"We went up into the post and on to the house. I had no idea what was going on at first. I had to gather my senses, gather my stuff, and then leave the truck. And that's when I noticed we're on a house," said Cox.

Roch Bigras is the chief of the French River Fire Department that attended the scene. He said that safety was their biggest concern because of the live hydro lines that were on the truck and the building.  Hydro crews turned off the power to remove the lines before they were repaired.  Heavy trucks and a crane was called in to remove the transport from the crash site.

Police say the 24-year-old male driver, from Scarborough, has been charged with careless driving. 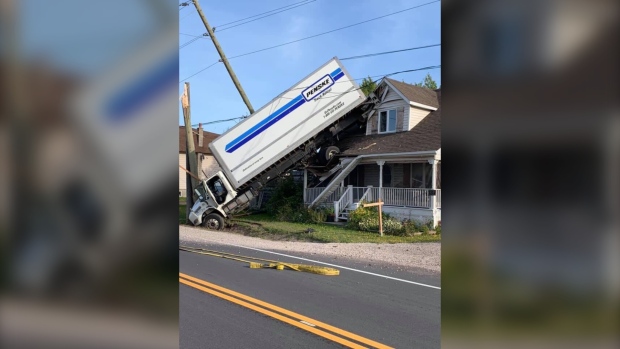 A single vehicle crash in a northern Ontario town has left a commercial truck pinned between a house and a hydro pole.

It happened in Alban, east of Sudbury, on Monday evening sometime after 5 p.m.

The crash has taken place on Highway 64 between Golf Course Road and Highway 607 in an area that is reportedly a 60 kilometre per hour zone.

Fire crews are on site and the road is blocked off in both directions.

Motorists going through towards Noelville are taking Golf Course Road to Hwy 607.

CTV News has been told that hydro in the area will soon be turned off so crews can assess and fix the damaged pole. 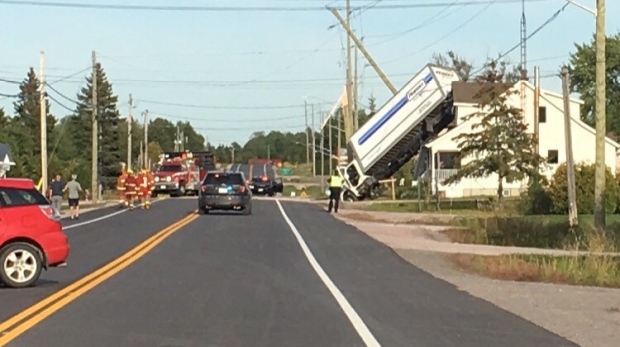