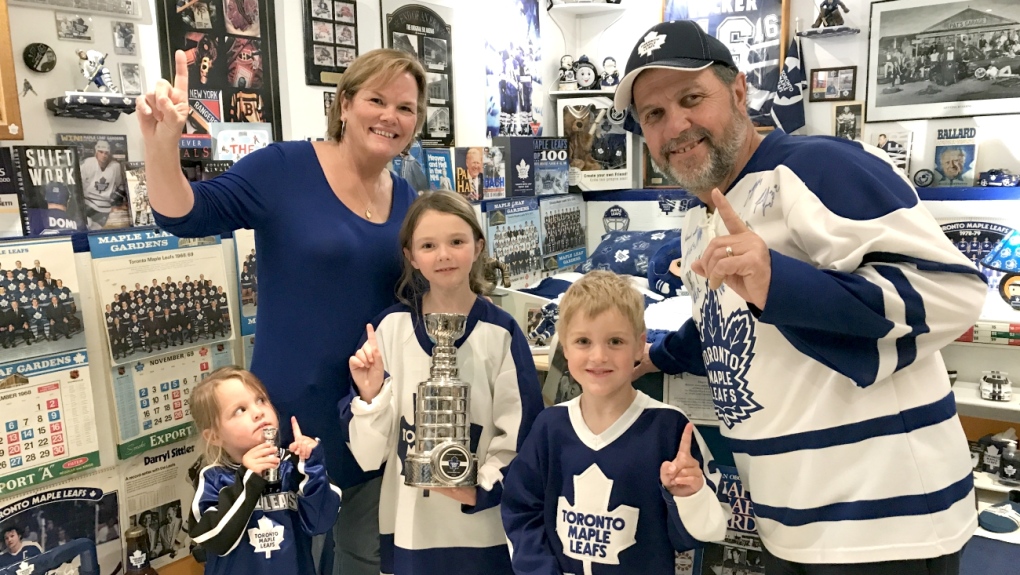 Retired city worker Nello Ronchin isn't just your ordinary Toronto Maple Leafs fan; he bleeds the 'blue and white' and has got the collection to back it up. (Ian Campbell/CTV News)

SUDBURY -- Retired city worker Nello Ronchin isn't just your ordinary Toronto Maple Leafs fan; he bleeds the 'blue and white' and has got the collection to back it up.

Ronchin is just one of many hockey fans across the region that have been missing the game. He's lost track of how many collectibles he owns in his 'fan cave,' but it likely runs in the thousands.

They picked a room when they built his house and already, they're running out of space.

"I'm not lying when I say 99 per cent of this has been all gifts --birthday gifts, Christmas gifts, friends who know that I'm an avid Leafs fan," he said. "They pick something up at yard sales or whatever and they hand it over to me."

Ronchin traces his love for the blue and white to 1966, when he was trying to decide who to cheer for,

"Back then, it was either Toronto or Montreal that played on Hockey Night in Canada," he said. "So I asked my dad and my dad said, well, you have to cheer for Toronto because they're the closest to us. And so, lo and behold, they won the cup that year, and I'm thinking my dad is the smartest fan ever, he sure knows how to pick a winner.

The father and grandfather has been trying to keep himself busy by watching classic games on television, but it's just not the same.

The NHL recently announced it was planning on restarting its season if at all possible, and was looking for two hub cities to host games.

Toronto, Edmonton and Vancouver are all in the running.

A recent poll by Leger and the Association for Canadian Studies found 47 per cent of Canadians don't really care if the puck is dropped on Canadian soil. Still, Ronchin is hoping Toronto gets the bid.

"I would love to see it in Toronto," he said. "I hope they pick Toronto as one of the hubs and man it's been a long time, I think they've earned it."

He tells CTV News he's never once waivered in his love of the beloved Leafs -- but admits at times, it's been hard.

His favourite piece of memorabilia is the old seat he owns from the Maple Leaf Gardens blue section. His favourite memories include Darryl Sittler's 10-point night, raising money for Easter Seals and getting to skate on the ice with players.

"I was all for his Maple Leaf room," said his wife, Mary. "I'm glad it was a blue-and-white .... I knew I was in for trouble, but he's been quite great about the whole thing. I'll watch for a while but I get tense because he gets quite emotional."

The couple have been married for 35 years and Mary says the bridal party even wore blue-and-white to the wedding.

"When my father walked me up the aisle and handed me to Nello, he looked in Nello's eyes and said I know if you love her as much as the Toronto Maple Leafs , she'll be in good hands and it's been an awesome ride every since," she said.

For now he's still collecting and has the 'fan cave' ready to go for those stopping by to have a peek. There's even items he doesn't realize he has until he spends some time in the room.

And what about the Buds' chances should play resume?