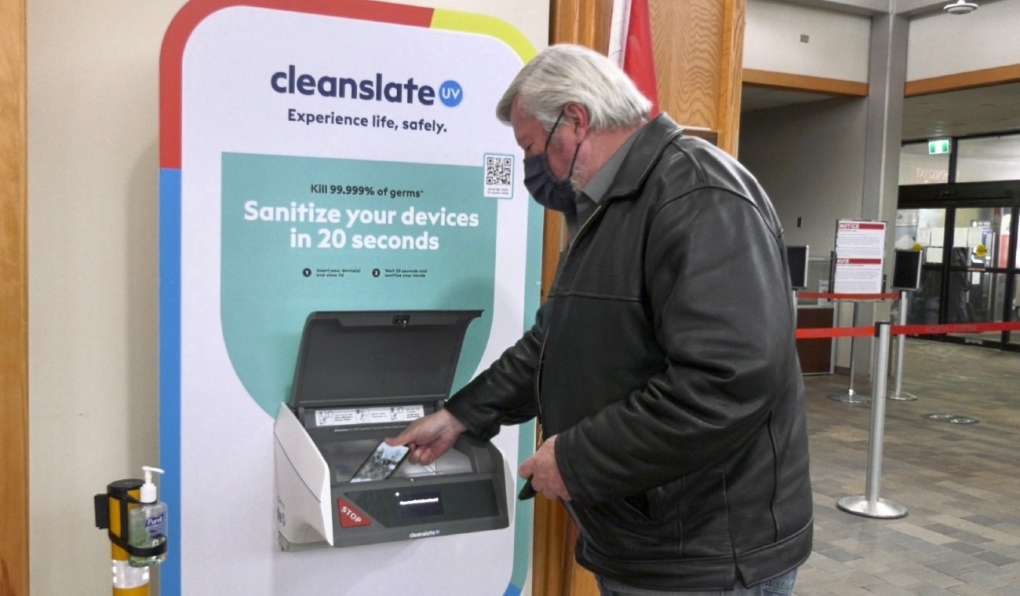 Dave Dayment, manger of the Timmins Victor M. Power Airport, places his cellphone and other pocket items in a new sanitizing machine on loan from its manufacturer. The unit helps prevent COVID-19 and other viruses from catching a free flight. (Lydia Chubak/CTV News)

TIMMINS -- The Timmins Victor M. Power Airport has a new tool to help battle the spread of COVID-19.

It’s a machine that sterilizes items travellers carry on a plane with them, such as cellphones. The airport’s manager is borrowing the sterilization unit from the manufacturer.

“You can put your glasses, pens, keys, coins in it and in 20 seconds it’ll sterilize everything in there,” said Dave Dayment. "It’s a spectrum of light. There’s no heat involved and it doesn’t damage any electronic equipment."

Dayment said it’s a small thing he can do to help during the COVID-19 lockdown.

“My security folks tell me that there’s quite a few people using it while they’re waiting for their flight,” he said.

Dayment is also doing some waiting of his own, wondering if financial relief for the airport will come.

The facility is only running three Air Canada flights a day and so isn’t generating much revenue. Dayment said it has lost close to $2 million since last March, and there is less than $1 million in its reserve fund, which he doesn’t expect will see the airport through 2021.

He’s planning to ask city council for assistance, since it is a municipally owned facility, and the federal government has said it will help, but has not announced anything specific.

“If there’s any funding coming, it can’t be earmarked for anything other than keeping us whole," Dayment said. "It has to go towards our expense side. We need something ... that ... says here’s x dollars, use that for your insurance and your hydro and stuff you had to pay cost on that you have trouble maintaining.”

“It’s actually all across Canada,” said Charlie Angus, MP for Timmins-James Bay. “I talked to MPs and you know, Western Canada; southern Ontario airports ... they’ve been devastated. What I think we’re going to have to look towards is a major government investment and I’m hoping as we move towards the budget, we’re going to see the government starting to move.”

The airport in Timmins is considered essential as it also is a connection to the northern coastal communities and is a base for Air Ornge, and the Ministry of Natural Resources and Forestry.