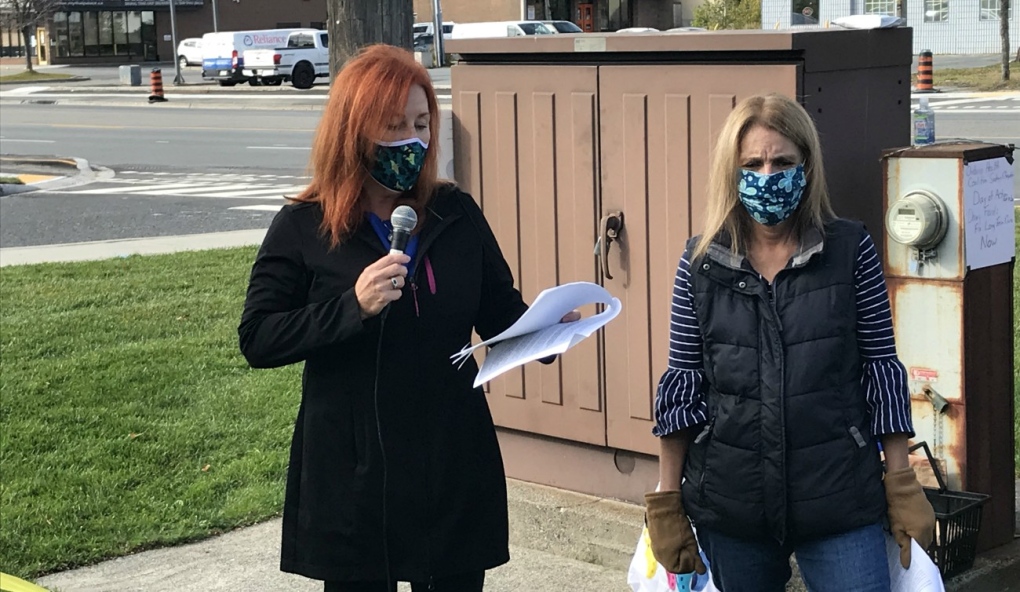 Loved ones, family members and staff gathered outside Sudbury's Pioneer Manor on Thursday as part of a province-wide protest by the Ontario Health Coalition. They want more support for long-term care facilities across the province. (Ian Campbell/CTV News)

SUDBURY -- It was an emotional moment for some outside Pioneer Manor as loved ones, friends and staff gathered as part of the Ontario Health Coalition's 'Day of Action.'

The province-wide campaign Thursday was organized to call on Premier Doug Ford to make long-term care funding more of a priority in his government.

They want a minimum care standard for residents of four hours per day, along with staffing concerns and lack of full-time positions addressed.

"It's to show the Ford government and Doug Ford that the people of Ontario are fed up with what's happening in long-term care, to the residents, to the families, to the staff," said organizer Dot Klein. "This has been an ongoing problem for 25-30 years."

Pioneer Manor was picked as the site of the protest because it's one of the largest municipally owned facilities of its kind across northeastern Ontario.

Participants also took part in a car rally between the Westmount Retirement Home and the Pioneer site with signs that read "Our Seniors Deserve Better."

"We've had Band-Aids, but nothing permanent so we're taking a stand," said Klein, who's also a registered nurse.

Klein said 25 chapters of the Ontario Health Coalition took part in the Day of Action. Similar events were also held at Queen's Park and in front of MPP Ross Romano's office in Sault Ste. Marie.

One of the more powerful moments was hearing from Lynn Logtenberg, whose father, JP, was the first resident inside Pioneer Manor to contract COVID-19.

"We cry -- I've left the home in tears. It's very difficult, you want them to be … treated as humans," Logtenberg told CTV.

She said they were only able to see him via tablet until Logtenberg was declared an essential visitor in June.

When she got inside, she said the condition of the residents inside shocking.

"I believe I was one of the first ones on the floor and it was horrible to see because you actually see the muscle loss on the residents because they're wearing shorts, you see it, it doesn't matter that you're walking in, you see it," she said. "You see the sadness, you see them upset. They would come up to me and say, 'when it's going to end Lynn?"

Logtenberg and her sister don't blame staff at Pioneer Manor. They say it's the province that has to act.

Eric Boulay is acting president of Unifor Mine Mill local 598 and represents about 600 long term care workers in the region.

Boulay said he's heard some workers are having to attend to 16 residents a day, which factors into roughly 30 minutes of personal care, per resident, at most.

Government needs to step up

"The government really needs to step up here to increase funding permanently, right, 'cause Band-Aid solutions really aren't going to get us through this," he said. "Well, it will get us through it right now maybe but it won't fix the problem long-term."

"They are going to get hit even worse, because the present staff is burnt out," said Klein. "They've had eight months of a tremendous workload."

Sudbury-area MPPs Jamie West and France Gelinas were on hand to hear the personal stories and to see what they could do to help.

"When I first ran in 2007, I ran on a platform of 3.5 hours of care per resident of long term care homes," Gelinas, the NDP health critic at Queens' Park told the crowd. "Fast forward to 2020 and Ontario still does not have a minimum standard of care for the people."

"We're not building rockets to the moon, we're providing personal care to elderly, frail seniors ... aging is not a disease, aging is a part of life," she added.

"COVID put a lens on it and highlighted how bad it was and this is an opportunity, with public support, and the willpower of government to get it done," said West. "We just need Doug Ford and the Conservatives to listen to us."

"This extends to ensuring a steady supply of staff available to work on an emergency basis in long-term care homes. The ministry is working to develop a comprehensive staffing strategy for the sector by the end of the year."

The Ontario government has since launched an independent commission into COVID-19 and long-term care. It's hoping the commission will provide guidance on how to better protect residents from any future outbreaks.

She said the government is committed to making that report public.