Long-time hockey group in Sudbury takes the game outside

SUDBURY -- A group of hockey players in Sudbury decided to take their regular Friday afternoon game outside this week when all of the city’s arenas were booked.

For approximately 40 years, the group of current and former pharmaceutical reps have been gathering for a weekly match at the Garson Arena, but they were forced to find a new place to play this week as all city arenas were booked solid with tournaments. That’s when they turned to the Algonquin Playground.

“The quality of the ice is pretty spectacular for outdoors,” says Ken Jones, the organizer of the team. “The guys are ready to go and we play all dressed in original authentic Toronto Maple Leaf blue and Montreal Canadian red. It’s a lot of fun.” he added. 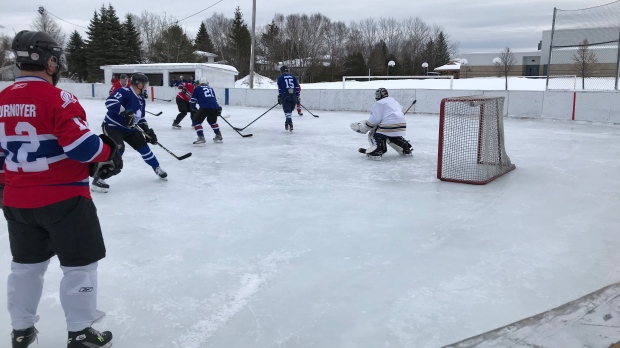 Algonquin Playground is rare in the sense that it has it’s very own Zamboni. It’s a vintage ride that once belonged to the Sault Memorial Gardens, and local volunteer, Colin Firth, says it typically makes a strong difference in the quality of the ice.

“There’s kids that come around, and adults they come from all across the city to come and skate at Algonquin Playground." he says, adding "We are confident that the effort that we put in here, that we’ve kind of brought up the playground quality of the ice a couple notches and it’s just a lot of fun getting out and driving the old girl.”

Spending a few nights a week at the rink, Firth said he never tires of his ride.

“It’s the ultimate man’s power tool for the winter. You know you can have a snowmobile, you can have your quads and everything but there’s nothing like this ol’ Italian gal, the Zamboni! She’s the real Italian sports car!”

When the team was struggling to find a venue, Jones reached out to Firth, a long-time friend. Jones has been part of the regular Friday games for the last few decades and has taken over as the unofficial captain.

He says while he has played many games over the years, this one sticks out from the rest.

“I’m excited to play hockey anywhere at this age, but this is special!”