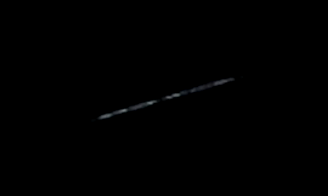 Many curious CTV News viewers and readers are wondering what the lights in the Sudbury sky Saturday night were.

In a note to CTV News, Mary Pat describes a "long, straight light going across the sky. Looked like a passenger train at night. Long light that looked like individually lit windows. Lasted over three minutes headed towards Sudbury from Fair Bank Lake."

Debbie Richards' daughter and her friends caught sight of the same lights and thought it might have been the International Space Station or some of Elon Musk's Starlink satellites in orbit. They say they captured this video at about 11 p.m.

According to Spaceflightnow.com, Saturday's launch of the Falcon 9 rocket at 4:40:50 EDT headed northeast over the Atlantic, but the tower of flatpanel satellites does look similar to the pictures provided.

NASA's 'Spot the Station' website says the International Space Station (ISS) would have been visible in Sudbury for seven minutes beginning at 10:42 p.m. It would have been about 74 degrees above the horizon moving from the southwest to the east northeast.

So Starlink or ISS, the truth is out there.