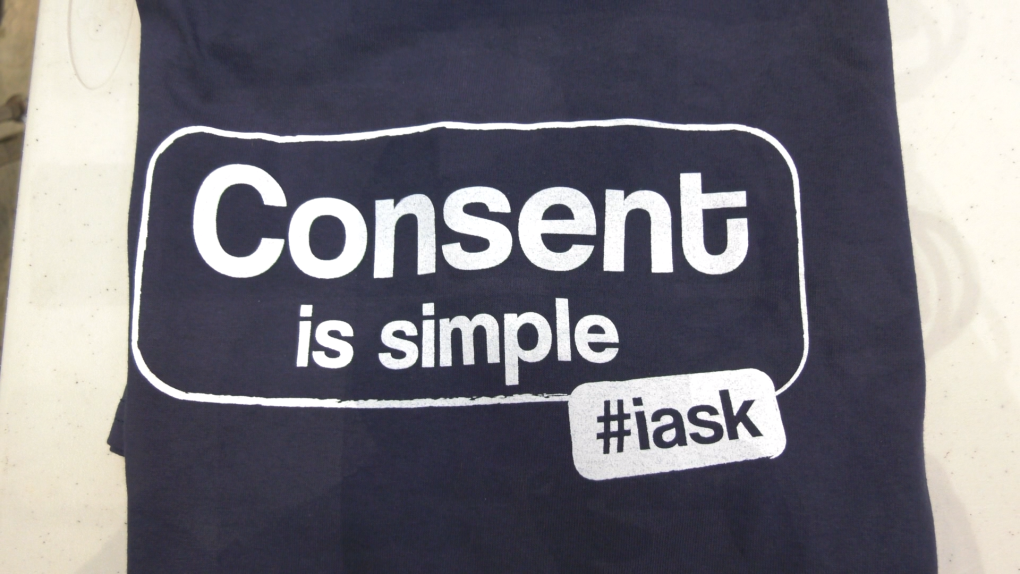 SUDBURY -- Respect and consent, two of the big words behind a new campaign that was launched on Friday at Laurentian University called Consent is Simple #iask.

It’s being spearheaded by the Equity, Diversity and Human Rights office on campus in a bid to show students that consent is important to everyone, no matter how you identify.

"Today we’re launching our sexual violence campaign: consent is simple," said Intake Support Community Outreach Coordinator Jessica Lamirande. "If you’re ever uncertain there is consent, the easiest way to do that is through communication, which is always by asking."

Students who made their way through the atrium of the Parker building Friday were given free t-shirts and personal alarms that all had the campaign's official hashtag, #iask.

"It’s something I know throughout my past three years at Laurentian, I’ve seen and I’ve had to deal with myself. I’ve had to deal with quite a bit of harassment, as well as people not necessarily understanding what 'no' means and that they need my consent," said Kaitlyn Kotila, a vice-president with Laurentian’s Students’ General Association. "It’s frightening and it’s disheartening to see this, especially at a university where I normally feel safe."

Kotila says the issue is not just Laurentian’s problem. The issue of consent is something that’s experienced by people on every university campus, not just schools in Sudbury.

"That’s the nice thing about this campaign, is that it’s fairly vague and that’s because consent is mandatory. It goes beyond the borders with sexual relations, it goes with everything," said Kotila.

Jennifer Johnson chairs the Women’s, Gender and Sexuality studies program at Thorneloe University. She likes the message behind the campaign.

"The #iask campaign is really an important step in bringing about a culture of consent," said Johnson. "What it is is letting people know we support a consent culture when it comes to sexual and intimate relationships."

According to Johnson, #MeToo has helped move the needle forward when it comes to addressing the issue of consent, making it an issue for administrators and people in positions of influence and authority.

"It’s about pushing out that message as many time as it takes to have everyone in the community understand that consent is really, really important," said Johnson.

She adds it’s important that universities set the bar very high, as students move out on their own and in many cases experience independence for the first time.

Detective Constable Stephanie Duchene is a sexual assault coordinator with the Greater Sudbury Police Service and deals with the issue of sexual violence on a routine basis.

"Consent is important. It is the law. It’s mandatory. Without consent, you’ll be running into some issues," said Duchene. "It is international. We have to continue working on these issues by educating the public."

"It’s fantastic. It’s catchy. Hashtag 'I Ask' is simple. What you need to do is ask for consent. If you don’t know that you have it, simply ask," said the detective.

According to Laurentian’s figures, one in three women and one in six men will experience sexual violence at some point during their lifetime.