Ring of Fire Metals is taking the next step toward critical mineral development in northern Ontario with Webequie First Nation.

The mining company and First Nation signed a memorandum of understanding (MOU) Tuesday "outlining a framework for collaboration on the proposed development in the Ring of Fire," located in the James Bay lowlands. 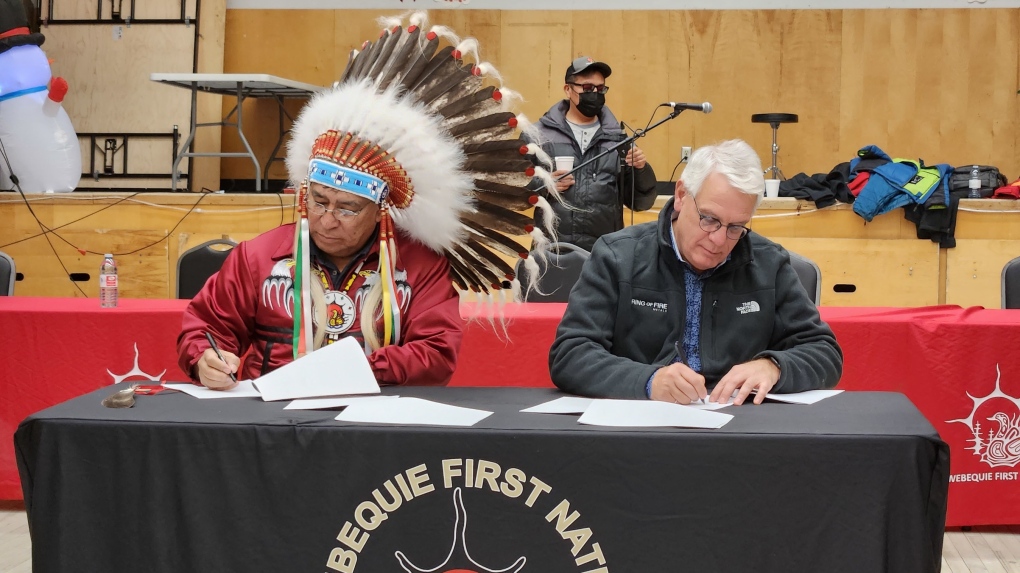 "The MOU details how the two parties will work together to progress ongoing exploration activity in the region as well as negotiations on a partnership agreement for the proposed Eagle's Nest mine," Ring of Fire Metals said in a news release.

The landmark agreement is an "important step forward" in the long-standing relationships between the two groups, the company's acting CEO Stephen Flewelling said in the release, and "signifies a formal transition to a new phase of collaboration."

"As leaders and critical decision-makers, we have a social responsibility with our members and that is to find ways to sustain our community through long-term relationship agreements that will bring and foster livelihood," Webequie Chief Cornelius Wabasse is quoted as saying in the release.

"We are exercising our sovereignty and the right to pursue economic sustenance in a manner that respects the land and brings opportunity for our young people."

Flewelling said Indigenous communities should play a central role in the development of resource projects on their traditional territory.

"Canada has a once-in-a-generation opportunity to develop the critical minerals the world needs to decarbonize," he said.

The Eagle's Nest project is one of the largest undeveloped, high-grade nickel-copper-platinum-palladium deposits in the world and has an expected 11-year mine life, with the potential to extend an additional nine years.

In April, Ring of Fire Metals was officially sold by Noront Resources to Australian-based Wyloo Metals.

The Northern Road Link would connect two proposed roads, the 200-kilometre Marten Falls to Aroland Community Access Road at the south end and the proposed 110-kilometre Webequie Supply Road to the Ring of Fire at the north end. 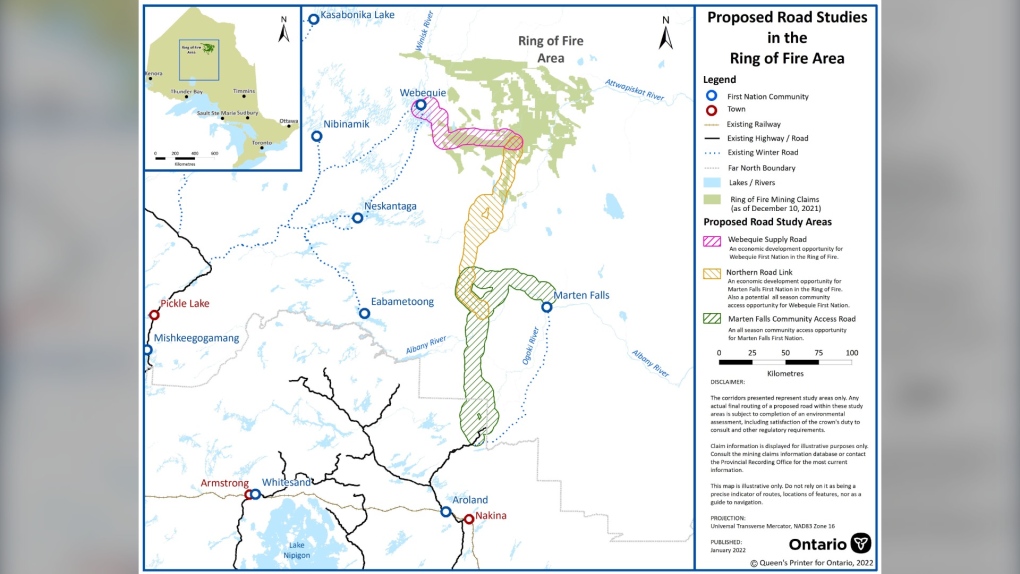 "This proposed road is the final piece of critical road infrastructure needed to ensure reliable, all-season road access to potential mining sites in the Ring of Fire and connect both First Nations communities to Ontario’s highway network," the province said in a news release.

The two First Nations are leading the planning of the road project dubbed the 'Corridor to Prosperity' in partnership with the province, which has committed nearly $1 billion "to support critical legacy infrastructure such as the planning and construction of an all‑season road network, and investments in high-speed internet, road upgrades and other community supports."

A powerful 7.8 magnitude earthquake rocked wide swaths of Turkiye and Syria early Monday, toppling hundreds of buildings and killing more than 1,300 people. Hundreds were still believed to be trapped under rubble, and the toll was expected to rise as rescue workers searched mounds of wreckage in cities and towns across the area.

Experts say the outlook for the loonie in 2023 largely depends on commodity prices, how the U.S. dollar fares, and whether central banks are successful in avoiding a major recession.

BoC's first summary of deliberations coming this week. Here's what to expect

The Bank of Canada is set to publish its first summary of deliberations Wednesday, giving Canadians a peak into the governing council's reasoning behind its decision to raise interest rates last month.

Beyonce sits alone atop the Grammy throne as the ceremony's most decorated artist in history, but at the end of Sunday's show it was Harry Styles who walked away with the album of the year honour.

Charles Kimbrough, a Tony- and Emmy-nominated actor who played a straight-laced news anchor opposite Candice Bergen on 'Murphy Brown,' died Jan. 11 in Culver City, California. He was 86.

The first battle tank from Canada destined for Ukraine lands in Poland, advocates come together to help sailors who have been stuck for months in a Quebec port, and Beyonce becomes the most decorated artist in Grammys history. Here's what you need to know to start your day.