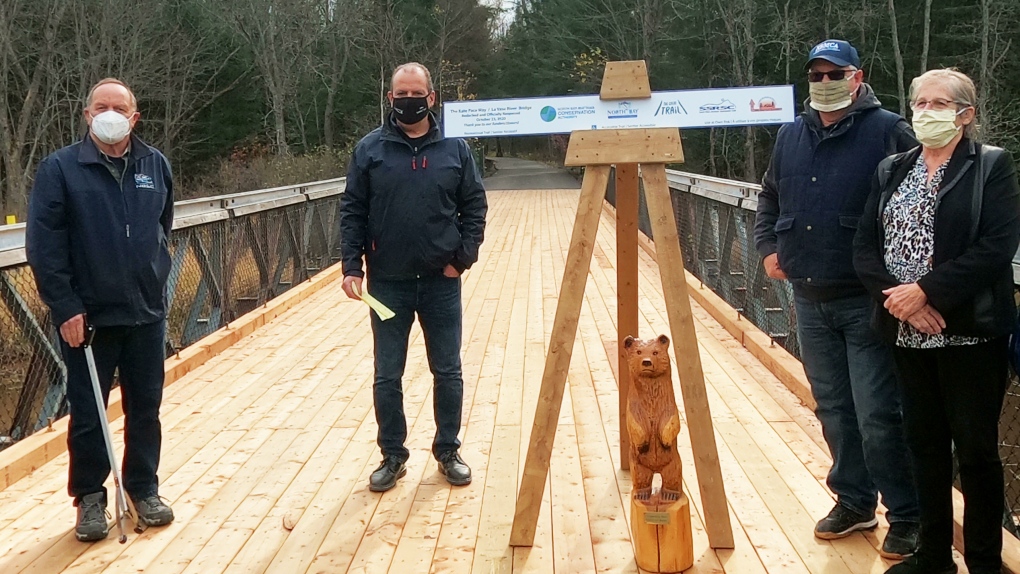 It's restoration costs totaled $33,600 with the conservation authority chipping in $11,600. The rest of the money is coming from a $12,000 grant via The Great Trail along with donations from the South Shore Restoule Snowmobile Club and the Near North Trails Association. Both associations donated $5,000 each.(Photo courtesy of North Bay-Mattawa Conservation Authority)

It plays a key role in connecting trails from nearby municipalities with the bridge overlooking the La Vase River.

"That project initiated several months ago with an inspection of the bridge deck. We knew it was deteriorating," said Troy Storms, Manager of Lands and Stewardship of the North Bay-Mattawa Conservation Authority. "The bridge deck itself took about four days to complete."

It's cost $33,600 to touch up the bridge. The conservation authority chipped in $11,600. The rest of the money is coming from a $12,000 grant via The Great Trail along with donations from the South Shore Restoule Snowmobile Club and the Near North Trails Association. Both associations donated $5,000 each.

"This pathway brings people into the community, so the active transportation part of it is really important," Storms said.

The Kate Pace Way is a section of the Great Trail of Canada and is part of the longest multi-use trails in the world. For some, the 12 kilometre pathway is the main route of transportation.

"We have over 1,200 km of trail in the North Bay area and that's the main one," South Shore Restoule Snowmobile Club President Dianne Tregunna said. "It's a go to for anyone. You can get to any small town from there. The bikers go to the Nipissing village."

In the winter, the trail acts as a corridor for snowmobilers.

The Near North Trails Association is overjoyed with the restoration. Colder weather is just around the bend and snowmobiling generates a large amount of winter tourism revenue.

"A lot of the dealerships have actually sold out of snowmobiles already this season which is not par for the course. It's fairly early on to have sell outs," said association district coordinator Jessica Reynolds.

The trails association has seen a great increase in people getting outdoors and using the local trails throughout the first few months of the pandemic.

"The ATV and boating communities saw a rise in interest in outdoor activities and so are we," she said.

The COVID-19 pandemic didn't hit the last snowmobiling season as hard as other organizations according to Reynolds.

She says that was down to the fact that the season was pretty much wrapped up by the time the pandemic began.

The association's interactive trail guide goes live on Dec. 1. It points out which trails are open for snowmobile use.

Reynolds anticipates most local trails will be ready for snowmobiles by the end of December.

For trails operated by the Ontario Federation of Snowmobile Clubs (OFSC), you must have a trail permit and you have to display it.

This includes trails on private property, municipal property and land owned by the government.

Trail permits can be found on the OFSC website.