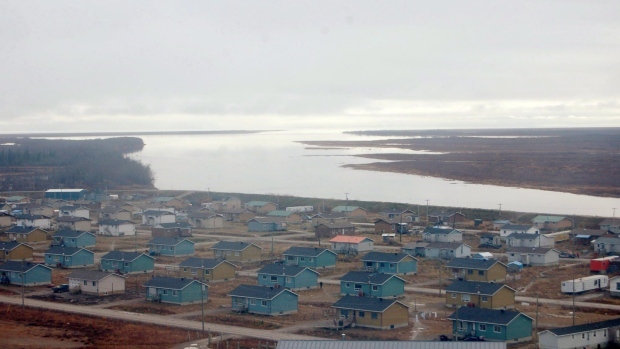 A humanitarian crisis is quickly overwhelming the remote community of Kashechewan, a First Nation on the coast of James Bay. (File)

SUDBURY -- A humanitarian crisis is quickly overwhelming the remote community of Kashechewan, a northern Ontario First Nation on the coast of James Bay.

In a community of 1,800 people, 114 have the disease and many more are awaiting test results, the community said in a news release Friday.

"Community leaders and workers who are not in isolation are quickly becoming exhausted and burnt out," the release said.

"Chief Leo Friday and his councillors are working 13-hour days, trying to support the sick and those who are in isolation, by doing wellness checks and delivering a limited supply of food, sanitation supplies and PPE. A similar story is unfolding in other remote communities along James Bay."

Friday afternoon, the Porcupine Health Unit reported 38 new cases in its coverage area, including 29 cases in the James Bay and Hudson Bay region, eight cases in Timmins and one case in the area of Cochrane, Matheson, Iroquois Falls and Smooth Rock Falls.

In Kashechewan, a total of 77 of the positive cases are young people aged 17 or under.

"Most adults have been previously vaccinated, but now the COVID-19 is rapidly spreading through the younger population," the release said.

"Children as young as four months have been infected. As of last night, eight community members had been airlifted to southern Ontario hospitals for treatment."

Chief Friday said the crisis could have been avoided if their concerns had been addressed.

“For years we have been asking for help to address our housing and infrastructure needs," Friday said in the release.

"We have some three-bedroom homes with 18 people living in them and others with four family groups. We are in the middle of an opioid addiction crisis, as well. We are told time and again by the government to submit proposals for support, but the proposals all have been rejected or delayed.”

A major issue is the lack of places for people to self-isolate. Officials have put up tents to house people who need to isolate on the high school grounds, "but these people will still need to share washroom and cooking facilities, leading to more spread of the virus," the release said.

Kashechewan council has asked the Canadian military to bring supplies and help build isolation centres, but the request has not been approved.

"A teleconference yesterday with Marc Miller, Minister of Indigenous Services, left the chief without any firm commitments of concrete help," the release said.

“We have started to receive offers of help from organizations like the Canadian Red Cross, but it takes time to get those workers in place," Wilbert Wesley, Mushkegowuk Council’s manager of emergency services, said in the release.

"We need to ensure that they are fully vaccinated, tested and have a place to stay.”

In addition, Wesley said the only large cargo plane in the James Bay area is scheduled for a four-week maintenance overhaul, leaving remote communities dependant on small planes that will not be able to deliver larger shipment of equipment or supplies.

Friday said residents want to know the government is going to help them.

“We need help, but we also need to feel that Canada has not forgotten us,” he said.