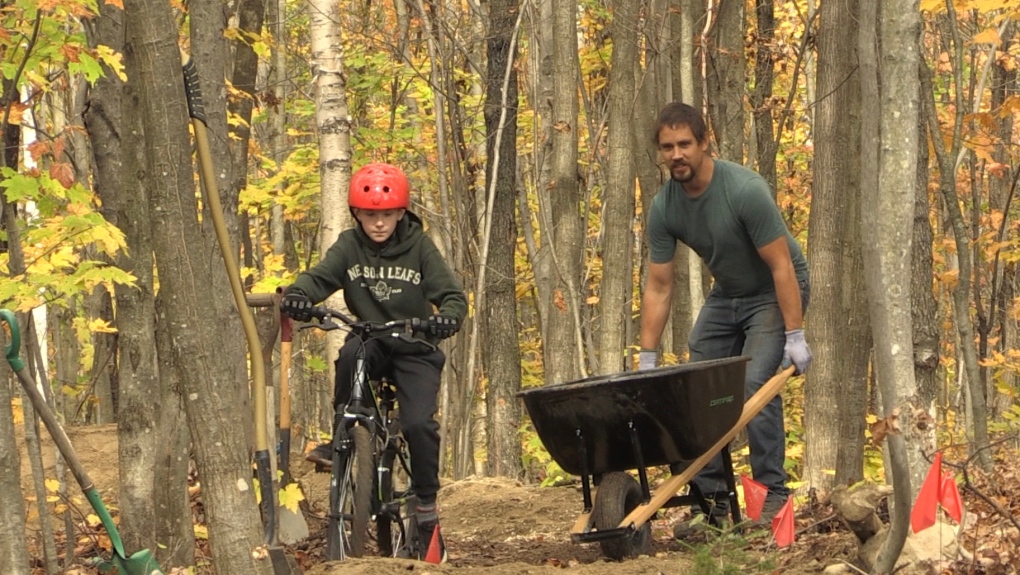 The pump track on Tower Drive isn't expected to be completed until mid-summer next year. But volunteers with the North Bay Mountain Bike Association were eager to get started, even if it meant only getting some done before stopping for winter. Oct.4/20 (Alana Pickrell/CTV News Northern Ontario)

NORTH BAY -- Mountain bikers in North Bay hung up their helmets and grabbed their shovels on Saturday as construction continued on a brand new pump track on Tower Drive.

"[It's] really a community initiative to build some trails here and this pump track is kind of a beginner to advance a little training area," said Vice President of the North Bay Mountain Bike Association, Travis Murphy.

"I think its gong to be a fantastic, fantastic thing to have in the community here for the kids learning how to bike, for adults who are just looking to have some fun."

Several volunteers came throughout the day to help construct a new track with physical distancing measures in place and other COVID-19 safety protocols.

Even some of city’s youngest bikers were doing their share by shovelling dirt and pushing wheelbarrows.

"A pump track is basically like something that you would ride on that doesn't have lots of like rocks and roots," explained 10-year-old William Raymer, who was helping with the construction.

Murphy adds, "this particular pump track is a great example of an organized event in which we've had numerous volunteers come out through the day, just dig some dirt, get dirty, the kids are playing in the mud, and they're moving rocks around, just doing things that kids should be doing."

The track isn't expected to be completed until mid-summer next year. But volunteers with the North Bay Mountain Bike Association were eager to get started, even if it meant only getting some done before stopping for winter.

"There's hundreds of man hours that go into building something like this," said Murphy.

"We've got kind of three primary loops that we're working on here. We'll probably be done one of three."

Although still under construction right now, several kids were eager to test out the new track. It already got a stamp of approval from 12-year-old biking enthusiast Grayson Franks who bikes four times a week.

Shovels and volunteers moved to the side so that Franks could run through the track a few times half way through the day on Saturday.

"I like the berms a lot, because you can ride them high and slash dirt."

Even though Franks was the first one to actually peddling on the fresh dirt, Raymer is also excited about what's to come.

"I'm very excited about this pump track because it's going to be close to my home," said Raymer.

"It's like a big pump track and we don't have lots of pump tracks where I live so I think it's going to be fun."

Murphy says a professional pump track usually comes with a price tag "upwards of $500,000" however, for the association it was actually free.

"We've had a lot of volunteers and a lot of community local organizations come and donate materials and equipment and it's just really shown how in times like COVID-19, how the community can really make a difference on, you know, day-to-day happiness," he said.

The North Bay Mountain Bike Association has about 150 members, but the track is expected to be used by many more bikers than that.

"At large, I think the community here has well over 3-400 avid bikers and then all the people, kids who are learning how to bike," said Murphy.

Franks adds, "I feel pretty excited because you can come out and ride it whenever you want."

The North Bay Mountain Bike Association has built several trails this summer at the end of Tower Drive to help promote mountain biking in the city.