In Timmins, a robbery in progress gets thwarted by an employee showing up for work 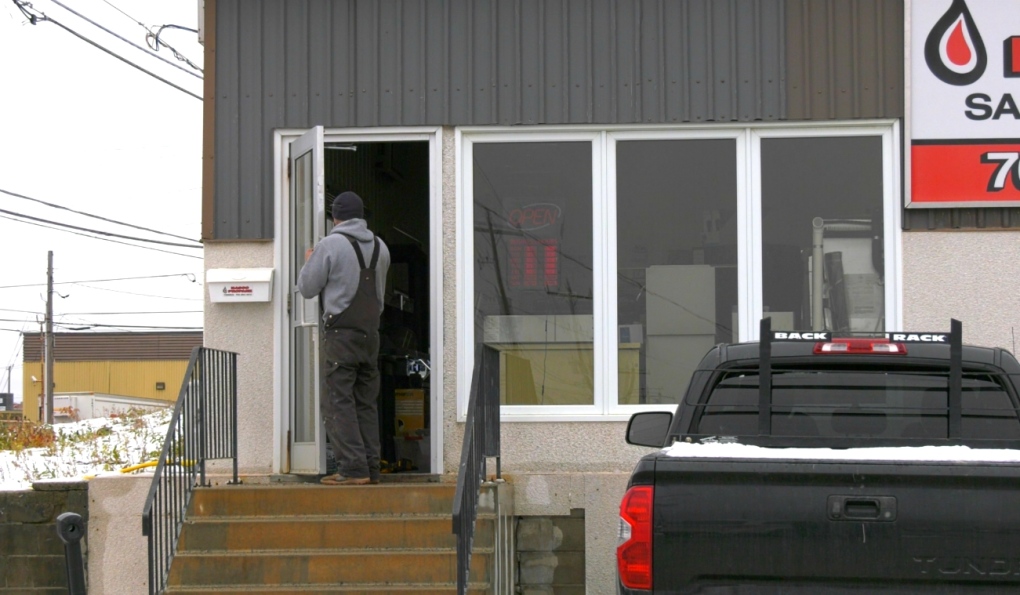 The front door at NASCO Propane in Timmins is under repair after a would-be thief pried it open to gain entry. The store manager said the robbery was foiled when an employee showed up for work and noticed someone was still inside the building. (Lydia Chubak/CTV News)

TIMMINS -- There were some scary moments for an employee at a Timmins business when he showed up for work and discovered a crime in progress.

Timmins Police confirmed NASCO Propane on Railway Street was the target of an early morning break-in and robbery.

Store manager Mark Basaraba said he got a call from one of his technicians around 5:30 a.m., who said the front door had been pried open.

The technician didn't enter the premises, but immediately called his manager. While they were talking on the phone, it became apparent the suspect was still inside.

Afterwards, they used surveillance footage to piece together the sequence of events.

"Actually we watched him inside on the camera (and) when he heard him, he actually put his bag down, hid behind a BBQ, took out his crowbar and then started to proceed to the door," Basaraba said.

Didn't know what to do

"So at that point, it startled the technician and obviously he didn't really know what to do at that point. And I'm like OK, well, I'm going to call the police 'cause it's kinda scary."

"Some crimes are hard to solve and some of them are relatively easy," said Marc Depatie, communications coordinator for the Timmins Police Service. "This wasn't terribly sophisticated in terms of how the crime occurred. We did follow the person's tracks through the snow until we discovered the location of the suspect. He was taken into custody without incident."

Basaraba said this is the first time the business has been targeted and around $70 in cash was taken.

"If your door is broken be cautious ... because you don't know what that person is going to do if they're feeling threatened," he said. "Have an alarm system and, you know, try to be diligent that way. But at the end of the day, if somebody's going to break in, it doesn't matter how many bars or locks you have, they're still going to break them."

Timmins Police officials said they arrested and charged a 35-year-old man. He was released from custody and will return to court in November to answer to a number of charges laid against him, including break and enter and assault with a weapon.