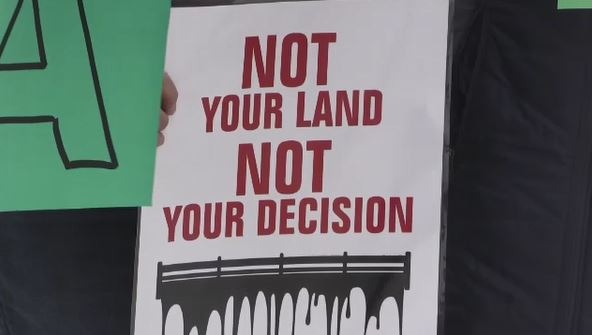 SUDBURY -- A slowdown is planned for Highway 17 in Mississauga First Nation, near Blind River, on Monday, Feb. 17 beginning around noon.

Organizers say it is in solidarity with the Unist'ot'en matriarchs and land defenders in B.C.

Tracy Fraser is one of the organizers of the event. She says members of the First Nation will be joined by others from Sault Ste. Marie and neighbouring communities.

They are anticipating 20-40 people will take part in the slowdown and Fraser says neighbouring Serpent River First Nation is also planning a slowdown Monday.

The event begins at 11:30 a.m. with warming fires at the old gas station parking lot on Arsenault Road and those assembled will begin slowing down the highway at noon to distribute information about the unceded territory in B.C.

Organizers say money will be collected to support the legal funds of the Unist'ot'en people arrested by RCMP.

Fraser says Highway 17 will be completely closed around 1 p.m. for a women's pipe ceremony and round dance. She says they will have OPP assisting with safety.

Fraser says the government response has been too slow and there has not been enough communication with the hereditary chiefs.

On Saturday, the federal Indigenous services minister, Marc Miller, met with representatives of the Tyendinaga Mohawks to discuss a rail blockade that has shut down train services across Eastern Canada.

Unist'ot'en is one of 13 hereditary house groups within the Wet'suwet'en Nation in B.C.'s interior.

The occupation of the clan's traditional territory is at the heart of a wave of national protests and due to the hereditary chiefs' opposition to the planned pipeline expansion.