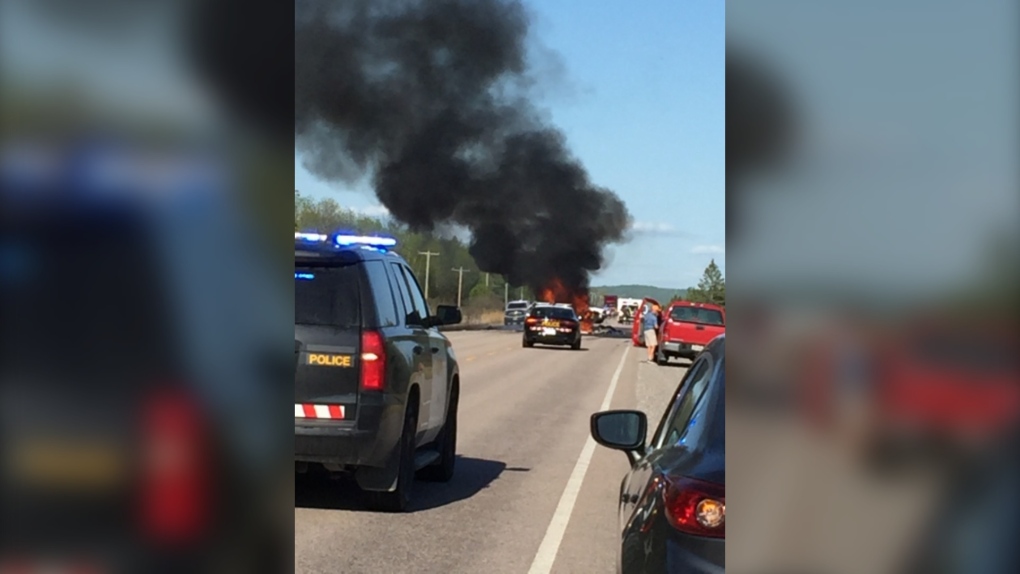 SUDBURY -- A 29-year-old man from Hanmer was the victim in a June 4 crash on Highway 17, the Ontario Provincial Police said Wednesday.

"The driver of the pickup truck, Andre Cote, age 29, from Hanmer, Ontario was pronounced deceased at the scene," the Nipissing West detachment of the OPP said in news release.

Police received the call at 6:15 p.m. June 4 about a two-vehicle collision.

"The investigation is continuing with the assistance of an OPP collision reconstructionist and an OPP technical collision investigator," the release said.

Ontario Provincial Police say the driver of a pickup truck was killed in a fiery crash with a tractor-trailer on Highway 17 between North Bay and Sturgeon Falls Thursday night.

Police say that the pickup truck was travelling west when it crossed the centre line and crashed head-on with a transport travelling east toward North Bay.

The collision caused the pick-up to catch fire.

Police say the driver of the pickup was the only person in the vehicle and was pronounced dead at the scene. Their identity hasn't been confirmed yet.

The driver of the transport was taken to hospital with minor injuries.

The highway was closed for approximately five hours after the incident and the Ministry of Transportation has tweeted Friday morning that the eastbound lane and shoulder at Beaucage Park Road is blocked so the tractor-trailer can be removed.

Highway 17 has been reopened between North Bay and Sturgeon Falls following a fatal collision Thursday night.

The highway was closed in both directions from Nova Beaucage Rd to Golf Course Road west of North Bay.

No other details on the crash have been provided yet.