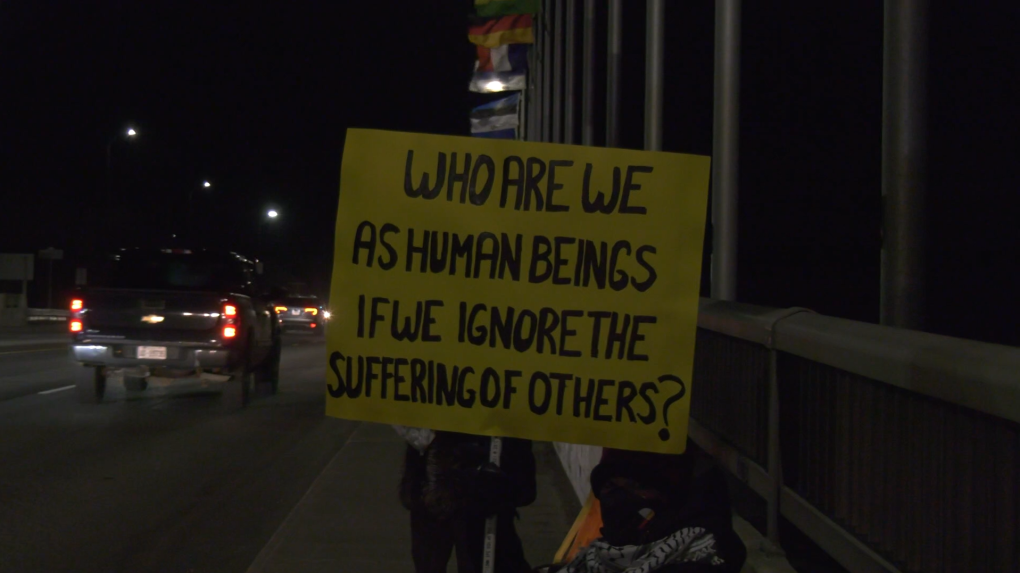 Hosted by the owner of Zaher’s Small Batch - a restaurant in downtown Sudbury - Deke Zaher started the event and more than 70 people showed their support throughout the 12 hours. Nov.14/20 (Jaime McKee/ CTV News Northern Ontario)

SUDBURY -- As the concern for homelessness, mental health, and opioids remains a top priority for many in the city, people came together Friday evening for a peaceful demonstration called ‘One Cold Night.’

Hosted by the owner of Zaher’s Small Batch - a restaurant in downtown Sudbury - Deke Zaher started the event and more than 70 people showed their support throughout the 12 hours.

What started as 30 people on the Bridge of Nations at 7 p.m. Friday evening, grew to more than 70 people by midnight, and at 7 a.m. Saturday around 15 participants remained.

“It was a social experiment let’s say,” said Zaher.

“But through the process we had excess support from the community. We had honking praise, and we had a porta potty and warm amenities, like coffee and hot pizza. Those are all privileges that who we are supporting today don’t have.”

Among those on hand was Sudbury Ward 11 Councillor Bill Leduc and MPP for Sudbury Jamie West.

“These are people who are marginalized. If people like us aren’t showing up and being their voice than nobody will be,” said West.

“I’m really hoping it provides an impact not just on the city but on the province as well,” he added.

Temperatures dropped to -3 overnight, and the wind-chill made it feel colder, but participants wanted to get their message across.

“I’m not emulating a homeless person by being here tonight. But I am here to let them know, I’m hearing you, I’m listening to you, I see you, and I love you,” said Deborah Swyer-Burke.

“People who aren’t homeless care very, very much about what happens to people downtown,” said Watson.

“There’s almost this ‘us and them’ mentality. There isn’t, it’s just ‘us’, and they need our compassion. I hope the city understands people do care.”

Later in the night participants walked from the Bridge of Nations to a shelter downtown and said they saw more than 10 homeless people struggling out in the cold.

Participants donated food, warm clothing and blankets to those who accepted it.

A young homeless lady joined the demonstration Friday night and said she wants to see more housing options in Sudbury.

“Apparently for a single male it takes six months to get your own place. If you’re a female, with kids or have a partner it is easier, which I don’t think that’s right,” said Sarah Edwards-Tippeneskum.

“There are also a lot of couples who would rather stay on the streets and be together than have to be separated in housing. I think they should build a shelter for couples,” she added.

Those who did last the full 12 hours said it wasn’t an easy night, but that they do hope it raises awareness for homelessness, opioids, and mental health in the city.

“I couldn’t imagine dong this on a daily basis. It’s not fair, and we all need to get together and help these people,” said Heather Myre.

The new Priest at The Church of the Epiphany, Reverend Doctor Elizabeth Green thinks this is a time for the city to “step up.”

“This is really an opportunity to challenge politicians, community leaders, church leaders, to do more in the face of this epidemic of homelessness in Sudbury,” said Green.

Plenty of new blankets and garbage bags full of clothing were donated from the community as well. The blankets and clothes will now be cleaned and then donated to those in need.