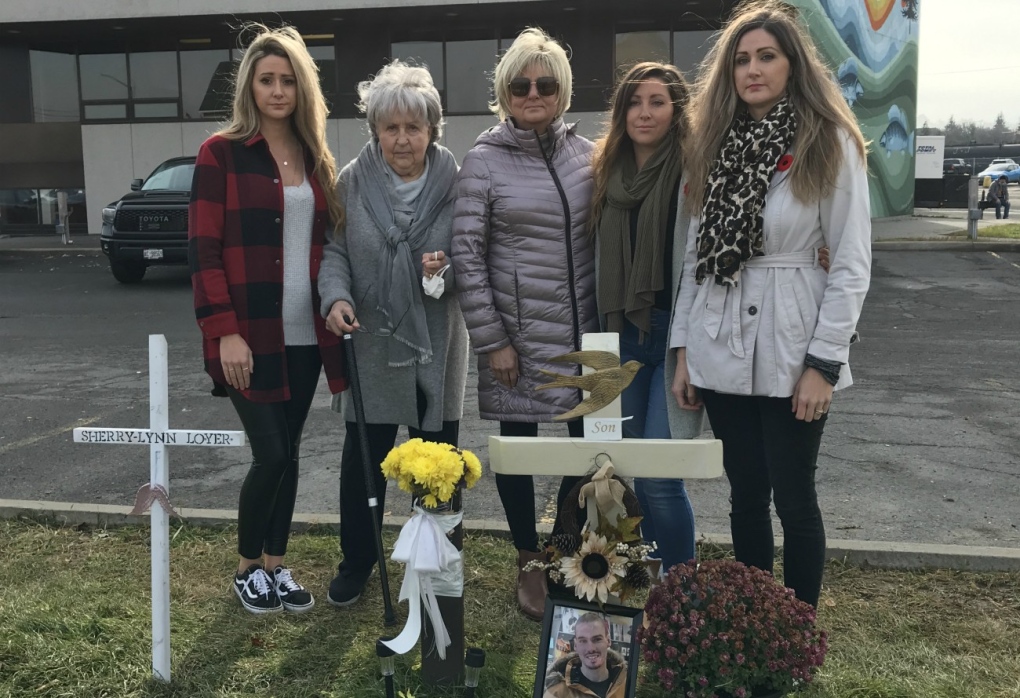 The family of Myles Keaney have erected a cross to honour him. Keaney lost his battle with drug addiction two months ago. (Ian Campbell/CTV News)

SUDBURY -- It's been almost two months since Myles Keaney passed away downtown from an overdose, but time hasn't made things any easier for his mom, Denise Sandul.

"My son was a drug addict, he didn't do opioids but there was always the chance that he was going to get an opioid, fentanyl, carfentanil, whatever so it was shocking to find out that he had died," said Sandul.

Keaney was your average Sudbury kid from a good home. He came from a great family and was even dubbed "King Keaney" by some for excelling at every sport he tried.

"I had no idea how difficult it was going to be as a mother and for his sisters and his grandmother," she said. "The pain is just unimaginable, unbearable. I still sleep with his ashes and I understand what other parents are going through and even children losing their parents."

Myles was also the youngest in the family with three older sisters and a brother who he looked up to.

"He's done some really remarkable things in his short life," said Keaney's sister, Lindsay Melanson. "He was just the perfect little brother and the three of us certainly adored him deeply."

"Myles was actually a shy kind of guy, the strong silent type but he was a super loving, sweet, sweet guy," said another sister, Brittney Sandul.

Keaney battled schizophrenia and drugs allowed him to cope. His family tried everything thing they could to get him treatment and even looked outside of the city, to no avail. He was found early one morning near a flower bed outside the Greater Sudbury Fire Hall.

Fearing he could be forgotten, another one of Myles' sisters, Christina Pisanti, wrote a Facebook post on the 'Silent No More' page, bringing her family's story to the attention of many in the city.

It's since been seen by thousands as a call for more supports to deal with Sudbury's growing drug epidemic.

'It can happen to anyone'

"It was so people might see that this is happening in our city and that it can happen to anyone," Pisanti told CTV News. "Addiction and mental health issues don't discriminate. He was loved and will be greatly missed and we really want to address there are a lot of gaps in the system and road blocks when trying to get help for your loved ones."

Pisanti said she and her family were overwhelmed at the messages of support and love they've received since going public with their story.

They've since erected a cross outside the fire hall to mark where Myles passed away. It stands as a visual reminder that the drug epidemic is real in Greater Sudbury and needs to be addressed.

The idea has caught on with so many people that others have asked the family for help in putting a cross up for their loved one.

Names have been placed on all the crosses; they're all Sudburians, sons, daughters, even parents.

"It's painful and there's a lot of guilt, feelings of what more you should have done, we're just kind of all left behind in all of this and missing him," Pisanti said. "Part of the problem when you're dealing with someone with mental health and addictions is that feeling of grief, that feeling of loss."

"A lot of these overdoses are happening behind closed doors where the families can feel alone and isolated, but our brother Myles did pass in a very public space, so we, as a family, feel a responsibility to share the story and let others know that they are not alone," said Melanson.

Stories like these are becoming all too common in the city. The Samaritan Centre's Lisa Long spoke with the family after Keaney's passing.

"It's such a personal and deep story," said Long. "When we hear about a client who's died, often times the family will drop off the funeral card and they dropped off the card when Myles passed away and right away we recognized him and were devastated. He was so young."

Long said more needs to be done to address the drug epidemic. She said it's not just downtown, it's all over the city and it needs a collaborative approach with all on board.

"I challenge the community to come and lay flowers, not only as a tribute to Myles, but other clients -- there are other beloved people that have lost their lives due to the opioid crisis," she said.

"I remember at the beginning of the pandemic shutdown, having a conversation with someone who was deeply concerned that this COVID crisis was in no way the crisis that they were battling," Long added. "He just wanted to remind me there was an opioid crisis that no one was taking notice of, and I haven't seen that guy in quite a few months and his anecdotal story has stuck with me."

While Long applauds the move to get a supervised consumption site, she said it's just one piece of the puzzle and it's going to require help from all levels.

She and the family plan on meeting with Sudbury MPP Jamie West next week to learn more about the efforts being undertaken at the provincial level.

In the meantime, Denise Sandul's message to parents is a passionate one.

"I want parents to know that I understand if you've lost a loved one, if you have a child that is an addict with mental illness ... the services are just not out there," she said. "We need to come together as a community to ensure that we are not going to lose any more lives."