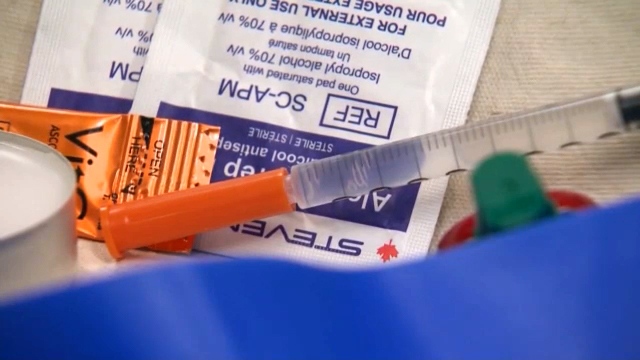 With the search for a permanent site frustrated, city council in Greater Sudbury is considering two downtown locations to set up a temporary site where people battling opioid addiction can shoot up safely. (File)
Sudbury -

With the search for a permanent site frustrated, city council in Greater Sudbury is considering two downtown locations to set up a temporary site where people battling opioid addiction can shoot up safely.

A staff report headed to council Tuesday outlines plans to set up temporary trailers to create the temporary supervised consumption site. If approved, it would be established either at the Elgin Street parking lot or at the Energy Court near Lorne Street.

Among the many requirements for a supervised consumption site, Public Health Sudbury & Districts said it needs at least 2,500 square feet, accessibility for paramedics, zoned for office use, and support from nearby businesses and neighbours.

Members of the Community Drug Strategy – a group that includes health, political and police officials – told councillors last month they have been unable to find a site. Either locations were not suitable, or the owner of the property didn't want to rent their properties for a consumption site.

Council directed city staff to come up with options on city land downtown, and several properties were reviewed before the final two sites were recommended. It would give the group about three years to find a permanent location.

The Energy Court site offers about two acres in space, isn't currently in use, and the trailers could be set up on the westerly limit of the land. The Elgin Street parking lot is a more central location, and is close to the Samaritan Centre and other services for the vulnerable population.

But it would reduce the amount of parking available downtown, the city staff report said.

"If this parking lot was considered, it would reduce the parking supply by an estimated 25 spaces," the report said. "This lot is currently used for monthly parking during business hours and is used for events at the Sudbury Arena, Sudbury Theatre Centre and other downtown events. Prior to the pandemic, it was fully subscribed and routinely had a waiting list of motorists willing to purchase monthly passes."

And when The Junction project is built, another 130 parking spaces would be lost downtown. For that reason, the report recommends the Energy Court.

"The Energy Court site would allow for development of an outdoor area with grass, trees or other vegetation designated for passive recreation, without further impacts to existing parking," the report said.

"The estimated cost of installing three trailers on a site, including renovations, site preparation, mechanical, electrical, connection to services such as water, sanitary and hydro and leasing the trailers for a three-year term is approximately $800,000."

The project would be paid for by drawing on funds in the Tax Rate Stabilization Reserve, a fund that provides for year-to-year variances in the operating budget. This reserve may also fund one-time expenditures, with the approval of city council.

Councillors will vote on the plan at their June 15 meeting.

This story has been updated to clarify the purpose of the Tax Rate Stabilization Reserve.

Sport Minister Pascale St-Onge is once again calling for change in Hockey Canada's leadership in the wake of new allegations against the troubled sporting body.

Ukraine claws back more territory Russia is trying to absorb

Canadian Prime Minister Justin Trudeau took a plunge this weekend when he decided to throw caution to the wind and go bungee jumping just outside of the Ottawa area on Sunday.

RCMP seeing 'significant increase' in fraudulent activity in Canada since 2020

Citing a 'significant increase' in fraudulent activity in Canada in the last two years— the majority of which in the last year has been happening online—the RCMP is calling on Canadians to be aware of scammers' tactics.

The would-be winners of almost $29,000 at a U.S. fishing tournament were disqualified on Friday, after it was discovered their fish were stuffed with lead weights and fish fillets.

Federal Conservatives say the Liberal dental-care and rental-housing relief legislation will only add to inflation without providing relief from the rising cost of living.

Quebecers are casting their votes Monday after a five-week election campaign. Incumbent premier Francois Legault's CAQ party has held a comfortable lead since the campaign began, but the battle for second has been tight between the four main opposition parties: Liberals, Quebec solidaire, Parti Quebecois and Conservative Party of Quebec.

A trial that started this week in Washington, D.C., is the biggest test yet in the U.S. Justice Department's efforts to hold accountable those responsible for the attack on the Capitol on Jan. 6, 2021. On trial is extremist leader Stewart Rhodes, founder of the Oath Keepers extremist group, and four associates.