Parts of downtown Huntsville remain under water, as areas in Ontario's cottage country fight back against widespread flooding.

Generators have been running around the clock, and sand bags remain in position.

At least nine businesses in Huntsville are in jeopardy.

Roads in the Huntsville area could remain closed for the next few days as officials wait for the water levels to go down.

Not everyone is deterred by the flooding.

Craig Shaw and friends enjoyed the patio of a local restaurant on Saturday despite the water. It is unclear whether the business remains open at this time. 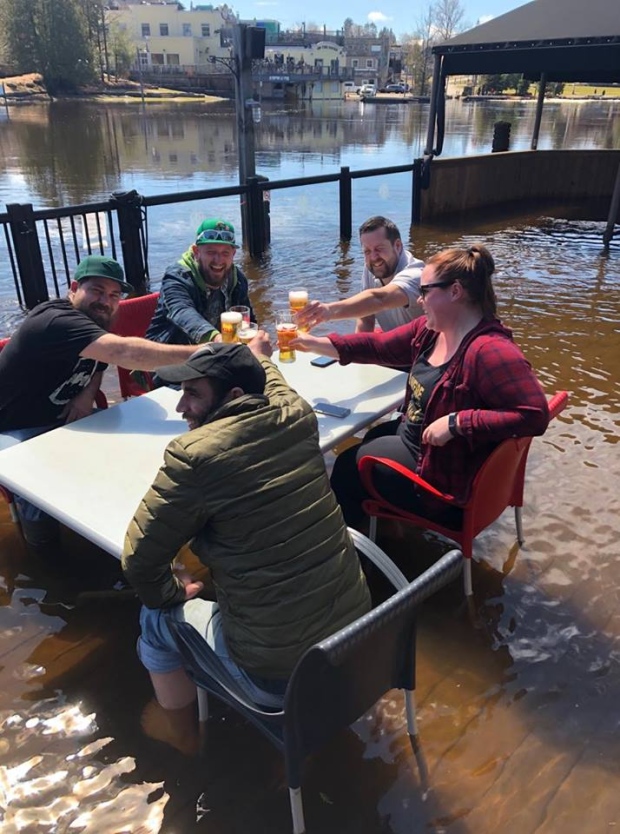 Parts of Highway 17 were closed due to flooding over the weekend east of Mattawa.

There is no estimate for when the section from Bissett Creek to Deep River might reopen.

Police say repairs are being made by the Ministry of Transportation.

People driving to and from Ottawa have been forced to detour via Highway 60 through Algonquin Park.

With warm weather on the weekend, and heavy rainfall across our region, there are some flooding concerns in several areas.

More rain is on the way for Sault Ste. Marie, and the Goulais River area is a possible flood point.

In the North Bay area, the local conservation authority has issued a flood warning.

Weekend weather proved to be a major stumbling block for one Powassan area family.

Rob Francis and his family say they were stranded without access to the rest of the community for days.

He says it took three days before city officials responded and put in a temporary fix, but it's the unknown part he says that worries him.

“I mean if our house had of caught fire, I mean, we had absolutely no way to get any emergency services here. So, it was a little stressful.“ said Francis.

“More Urban areas like Chippewa are on their way back down,  but some of the more rural watercourses and lakes are still responding and rising to the rain we had earlier,  so the flood warning does remain in effect for now.“ said the Conservation Authority’s Kurtis Romanchuk.

“We have four kids, and I mean luckily we were ready for Easter and we had enough food but it could have been worse, “said Francis.

The MNRF says a flood warning for North Bay and surrounding area will likely be in effect until Thursday.