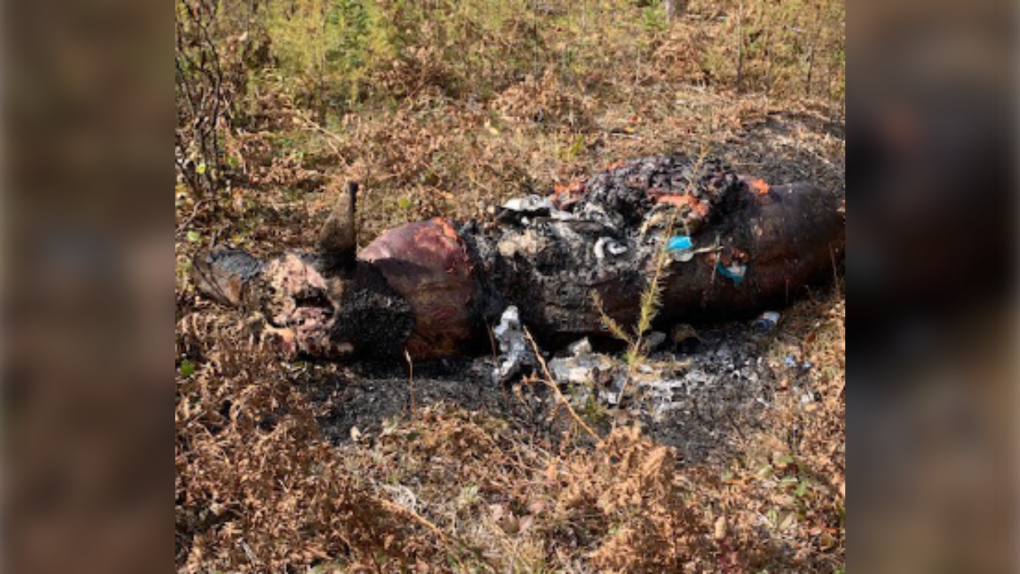 SUDBURY -- Warning - details and images may be disturbing to some audiences

Police and forestry officials are investigating after finding a moose that was left to rot in Mississauga First Nation, between Sault Ste. Marie and Sudbury, after being shot.

On Oct. 5 around 5:30 p.m. a fresh moose carcass was found on a trail off of Canoe Lake Road near the powerlines, police said in a news release Wednesday morning.

Mississauga First Nation Chief Reg Niganobe tells CTV News that the band member that found the animal's body had to leave the site to find cell service to make the call and when they returned it had been set on fire.

"The complainant returned to the site 15 minutes (later) only to find the carcass on fire," said police. "The moose had its hindquarters removed as well as its antlers. The suspect(s) had placed a tarp along with other garbage and attempted to burn the rest of the moose remains but were only able to burn the skin/fur off and leaving half of the meat still on the moose."

Niganobe said it is suspected the fire was made in an attempt to get rid of the evidence.

Not only did the incident occur on a reserve where hunting is not allowed, but the moose hunting season in that area doesn't start until Oct. 17, Const. Bev Gauthier told CTV News over the phone.

The Ontario Ministry of Natural Resources and Forestry (MNRF) has been called in to assist First Nation police with the investigation due to its forensic and technical knowledge.

Anyone with information regarding the person(s) responsible for this illegal moose harvest should immediately contact the Mississauga First Nation Police Service or the Ontario Provincial Police at 1-888-310-1122 or MNR TIPS at 1-877-847-7667.

Should you wish to remain anonymous, you may call Crime Stoppers at 1-800-222-8477 (TIPS), submit information online at www.p3tips.com or download the P3 app where you may be eligible to receive a cash reward of up to $2,000.