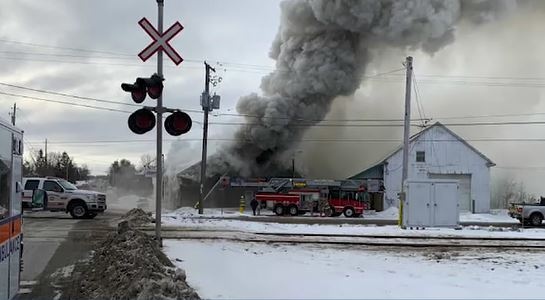 Nipissing West Ontario Provincial Police (OPP) say they were called in to help West Nipissing Fire Services with traffic control after a fire broke out at Mobile Mechanical Truck Repair & Service in Verner.

Officials say the fire started around 10 a.m. Christmas Eve and although it is not considered suspicious, the Ontario Fire Marshal has been called in to investigate.

OPP Constable Michelle Coulombe says as of 2 p.m., no flames are visible, but there is still a lot of smoke as fire fighters continue to work on the structure fire.

The building is believed to have been empty when the fire started and no injuries have been reported.

Police and fire crews are at the scene of a fire at a local business in Verner, between Sudbury and Sturgeon Falls on Highway 17.

The fire has forced the closure of Highway 64 between Principale Street and Betty Road.

Authorities are asking members of the public to stay away from the scene.

OPP Constable Michelle Coulombe originally said the Ontario Fire Marshal was not called in, but that changed Tuesday afternoon.